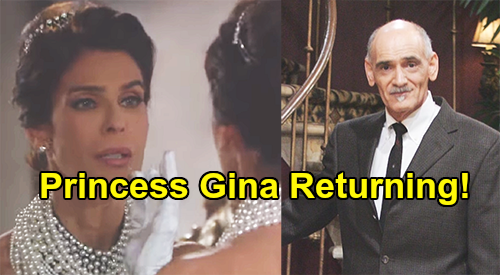 Days of Our Lives (DOOL) spoilers tease that Dr. Wilhelm Rolf (Willam Utay) will be up to no good. Rolf is used to operating without the confines of rules, yet now he seems to have gone “legit” and has convinced Kayla Johnson (Mary Beth Evans) to let him head a lab at University Hospital. Of course, that was all in the hopes that he’d successfully concoct the serum that would bring Jack Deveraux’s (Matthew Ashford) memory back.

DOOL viewers know that Jack now has his memory back, which he got from a bump on the head and not Rolf’s serum. So, what will Rolf do next? Well, it seems that he’ll take an interest in Hope Brady (Kristian Alfonso) as his next pet project. Recently, he was shown on screen bowing to Hope as if she were Princess Gina. Hope was weirded out by the whole scene and didn’t know what to make of it.

But could we be seeing a Princess Gina return for Hope? It’s certainly looking that way, since the DOOL fall promo showed Hope dressed up in Princess Gina garb. But what could all of that be about?

Dr. Rolf Forces Hope Brady To Be Guinea Pig In An Experiment?

Is Rolf going to do something to mess with Hope so that she once again thinks that she’s Princess Gina? According to DOOL spoilers, Rolf will soon corner Hope, luring her into some sort of trap.

That doesn’t sound good for Hope, and other DOOL spoilers indicate that she’ll struggle to break free from Rolf. Could Rolf capture Hope and force her to be the guinea pig in some sort of experiment in his hospital lab – perhaps some sort of mind trick that emerges Princess Gina from her psyche?

Hope is said to be facing some crises this fall, and Rolf messing with her head would certainly qualify as a crisis. What if Rolf manipulates Hope and brings out Princess Gina only on occasion, just as part of his experimentation? That would certainly mesh with other Days of Our Lives spoilers indicating that Marlena Evans (Deidre Hall) and John Black (Drake Hogestyn) will soon be seeing some changes in Hope.

Others Will Notice Some Disturbing Changes In Hope Brady

Those changes include Hope bring exhausted and not quite herself – which certainly sound like they could be aftereffects of something Rolf might do. The good news here is that Marlena and John will be noticing the changes in Hope, so perhaps they’ll be able to intervene and ultimately protect her from whatever Rolf ends up doing.

We also have to factor in the DOOL time jump that’s going to occur at some point down the line. As you may know, the show plans to advance storylines by a year sometime in the next couple of months, which means that it’s possible that Rolf’s experimentation on Hope (or whatever he ends up doing) could be a long, ongoing process, which doesn’t bode well.

What’s your take? Do you think that Rolf will bring Princess Gina back? Stay tuned to DOOL and don’t forget to check CDL often for the latest Days of Our Lives spoilers, updates, and news.