Days of Our Lives Spoilers: Jack and Eve’s Wedding Bombshell Twists the Knife for Jennifer 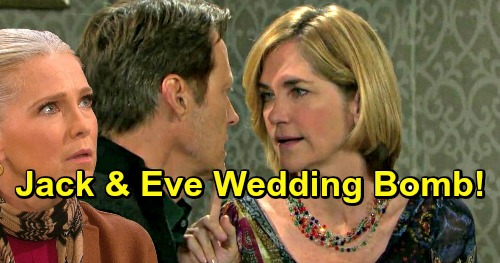 Days of Our Lives (DOOL) spoilers tease that Eve Donovan (Kassie DePaiva) could get another manipulative idea. Since she’s Claire Brady’s (Olivia Rose Keegan) partner in crime now, their scheming will continue. They have a mutual goal since Haley Chen’s (Thia Megia) deportation would help Jack Deveraux’s (Matthew Ashford) campaign and get Haley away from Tripp Dalton (Lucas Adams).

However, we all know what tends to happen when you put two schemers together. One or both of them tends to cause issues. Claire can’t trust Eve and Eve can’t trust Claire, so there’s bound to be trouble. Days of Our Lives spoilers say Eve will agree to some new terms with Claire, but she’ll ultimately back out. When Eve informs Claire of the change, there won’t much she can do about it.

Claire may keep plotting on her own, but it looks like Eve will focus on herself. It’s possible she’ll have a different plan in mind for bringing Haley down. However, there’s been some DOOL buzz about wedding bells for Jack and Eve.

With all this marriage talk, Days spoilers hint that Eve might steal the suggestion and make Jack her groom. They’re capitalizing on the conservative ticket, so it’d probably look better if they were married. They may also want to consider living somewhere besides a hotel, but that’s a problem for a later date!

Regardless, Days of Our Lives spoilers say Eve will deliver a shocker at a rally next week, April 1-5. Whether that involves Haley’s takedown or a wedding announcement, Eve and Jack’s nuptials seem likely at some point. Since Eve has such a tight grip on him, she can convince Jack to do just about anything she wants. The next logical step is tying the knot and rubbing it in Jennifer Horton’s (Melissa Reeves) face.

Would you like to see Jack and Eve get married for drama’s sake? That might make it even more satisfying when Jack gets his memories back and kicks Eve to the curb! We’ll give you updates as other Days news comes in. Stay tuned to DOOL and don’t forget to check CDL often for the latest Days of Our Lives spoilers, updates and news.