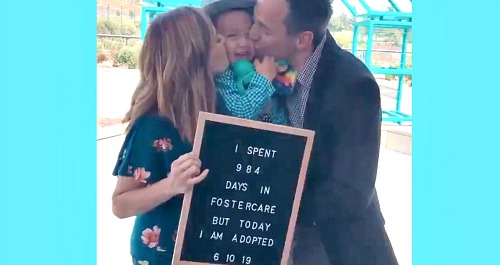 Days of Our Lives (DOOL) spoilers reveal that one NBC soap star has something to celebrate. DOOL fans know Jen Lilley as the feisty Theresa Donovan. She hasn’t made a Days comeback lately, but there are some good reasons for that. In addition to the other projects in Lilley’s career, she’d been quite involved in the foster care program and happens to be expecting a baby girl as well.

Lilley and her husband recently got some great news about their family. They were able to make their oldest foster child’s adoption official. Lilley shared a cute tweet about the big day, which featured a video clip of the kiddo sandwiched between his parents. Lilley and her hubby gave their new son some kisses as they held up a message about his adoption.

This is certainly exciting for Lilley, who’s also fostering her son’s younger half-brother. Since she’s over eight-months pregnant, that means she’ll soon have three kids under the age of three! However, Lilley wouldn’t have it any other way. She opened up about motherhood’s challenges and triumphs in a new interview with Parade. What’s one of Lilley’s best tips for moms out there?

“Just knowing that no one’s a perfect mom,” Lilley said. “Don’t go through Instagram and compare yourself to people because we’re obviously generally going to post our best moments. And sometimes I like to pose really low moments for people to keep it real.” Many Days of Our Lives viewers love to check in and see all those real moments!

Lilley also talked about foster care and what a rewarding experience it’s been for her. She confessed that it’s naturally been difficult at times, but the benefits are incredible. “They’re just children that came into the system through no fault of their own and they’re scared and they need someone who will love them and who will risk getting attached to them,” Lilley said. And it’s 100% worth it.”

Unfortunately, Lilley was unavailable when Caroline Brady’s (Peggy McCay) funeral was filmed, so she won’t be back for that next week. However, Days Our Lives spoilers say there’ll be plenty of other returns and surprises.

DOOL fans won’t want to miss the heartfelt tribute ahead. We’ll give you updates as other Days news comes in. Stay tuned to the NBC soap and don’t forget to check CDL often for the latest Days of Our Lives spoilers, updates and news.