Days of Our Lives Spoilers: Jen Lilley Gets A New Job 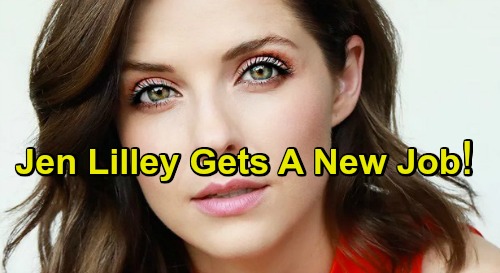 Days of Our Lives (DOOL) spoilers has some exciting news to pass on about Jen Lilley, who portrayed Theresa Donovan on the NBC soap. Jen has recently landed a role in a new television movie called “Puppy Party Romance.”

There’s no detailed information yet about the movie’s plot, but from the title it seems that the film will be a light romance involving puppies and puppy parties. What could be better? Jen will be playing the role of the lead character named “Hailey Goode.”

Puppy Party Romance will begin filming later this month in Vancouver, Canada. Christie Will Wolf is directing and Navid Soofi is producing the film.

It certainly sounds like the movie will be an enjoyable story. Fans of Jen’s should be sure to keep an eye out for Puppy Party Romance later this year. We’ll keep you updated as more details come in.

You may remember that Jen recently starred in the TV movie “Winter Love Story” for The Hallmark Channel back in January. Jen certainly seems to keep busy with movies, and that’s great news for her fans.

Are you looking forward to seeing Jen in Puppy Party Romance? Stay tuned to DOOL and don’t forget to check CDL often for the latest Days of Our Lives spoilers, updates, and news.