Days of Our Lives Spoilers: Jennifer Fights for Her Life in the Hospital – Coma Brings Heartbreak for Jack, Time Jump Twist? 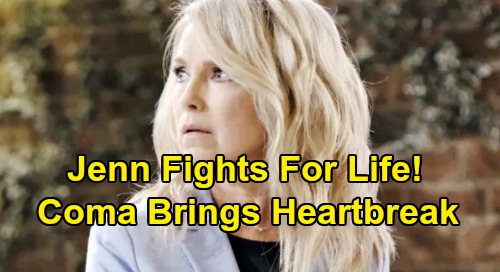 Days of Our Lives (DOOL) spoilers tease that Jack Deveraux’s (Matthew Ashford) world will be turned upside down. Everything’s going his way at the moment, which is typically a sign that trouble’s brewing. DOOL’s putting Jack on cloud nine just so they can throw him off it! He finally got his memories back and was granted a divorce by Eve Donovan (Kassie DePaiva), which led to his recent engagement.

Jack expects to begin a wonderful new chapter with Jennifer Horton (Melissa Reeves), but their happy ending will have to wait. Days of Our Lives spoilers say there’ll be some brutal blows for the Deveraux family. Jennifer isn’t Jack’s legal wife, but he admitted she is in his heart. He was hoping to make things official, but a major crisis will throw any wedding plans right out the window.

Before we get to the biggie, there’ll be another serious bump in the road. The pre-crisis, which certainly won’t be pleasant either! During the week of October 28-November 1, Days of Our Lives spoilers say Jordan Ridgeway’s (Chrishell Hartley) attack will leave JJ Deveraux (Casey Moss) injured. There’s no word yet on how serious JJ’s condition will be, but this isn’t good news.

Meanwhile, Jennifer will run into some drama of her own. DOOL viewers know Jennifer’s quite curious about Dr. Wilhelm Rolf’s (William Utay) latest project. She’ll hope somebody with more tech experience can crack that flash drive, but she’ll keep searching for answers, too. Jennifer is close to Hope Brady (Kristian Alfonso), so she’ll definitely notice when Hope’s behavior takes a wild turn.

Hope’s transformation into Princess Gina will leave Jennifer wondering what’s up. She’ll eventually start putting the puzzle pieces together, but figuring this out could put her in grave danger. Will Dr. Rolf do something to harm Jennifer? Will “Princess Gina” be the one to stop Jenn by force? Regardless, Days of Our Lives spoilers say Jennifer will be left fighting for her life!

During the week of November 4-8, Kayla Johnson (Mary Beth Evans) and Haley Chen (Thia Megia) will get to work. They’ll struggle to save Jennifer, which tells us that Jenn will be rushed to the hospital in bad shape. Unfortunately, Dr. Rolf probably won’t be willing to save Jennifer whether he caused the issue or not. She’s a threat to his project and got on his bad side, so he’ll have no reason to help Jack.

JJ’s fate hasn’t been revealed either, but the fact that Jenn’s being worked on right before the time jump may be significant. If you haven’t heard by now, a Days character will spend the one-year leap in a coma. Jennifer may be inching ahead of JJ as the top candidate due to the timing.

Plus, putting Jennifer in a coma might allow Jack to move on with someone else, which could complicate things after Jenn ultimately awakens. Whatever the case, Jack will be in panic mode as he deals with both JJ and Jennifer’s dilemmas. Some heartbreak is about to hit, so stay tuned. We’ll give you updates as other Days details emerge. Stick with DOOL and don’t forget to check CDL often for the latest Days of Our Lives spoilers, updates and news.