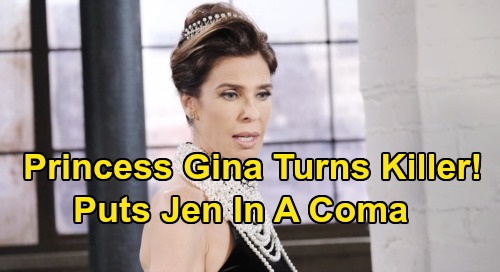 Days of Our Lives (DOOL) spoilers tease that Jennifer Horton (Melissa Reeves) is going to be in big danger. As DOOL viewers know, she just officially reunited with Jack Deveraux (Matthew Ashford) and the two got engaged. They’re as happy as can be, and it doesn’t seem that anything can get in the way of their happiness. But unfortunately, it looks like Jennifer will soon be under attack, and that it will have to do with her decision to go after Dr. Wilhelm Rolf (William Utay).

Jennifer recently came into possession of Rolf’s mysterious flash drive, which she thinks may hold some secrets about Rolf’s projects. As DOOL viewers know, Rolf has been involved in all sorts of nefarious DiMera plots over the years, so there’s no telling what’s on that flash drive. But it does seem that Rolf is determined to get the flash drive back at all costs. He even recently threatened Jennifer about it, so DOOL viewers know that he means business.

Well, there are some alarming DOOL spoilers about Jennifer that point to some serious consequences for her. First off, the spoilers say that Jennifer will suffer a serious fall, and it looks like this will come either at or just after her wedding to Jack in Town Square. DOOL spoilers also indicate that Princess Gina (Kristian Alfonso) will take drastic measures to protect Rolf’s secrets on that same day, so we can only assume that Princess Gina will have something to do with Jennifer’s fall.

In fact, it seems that Princess Gina will be on a mission to kill Jennifer, so there’s clearly something on the flash drive that Rolf really wants to keep secret. It may also mean that Jennifer was successful in hacking the flash drive, and she might possess knowledge that Rolf (and thus Princess Gina) will want to eliminate her for. At any rate, Jennifer will be in grave danger, and after her fall she’ll be rushed to University Hospital, where Kayla Johnson (Mary Beth Evans) and Haley Chen (Thia Megia) will work to save her life.

But Jennifer won’t be out of the woods once she’s safely ensconced in the hospital. DOOL spoilers say that Princess Gina will then take steps to ensure that Jennifer never wakes up. She might try to mess with Jennifer’s medical equipment or take other steps to kill Jennifer as she lays in the hospital bed. At any rate, things don’t look good for Jennifer, as Princess Gina seems to really be after her!

We should also point out that DOOL spoilers (courtesy of Jason47’s Facebook Page) indicate that someone will be in a coma when the DOOL time jump takes place on Friday, November 8. Given what will be going on with Jennifer, and Princess Gina’s relentless pursuit of her right about that time, it’s looking like Jennifer will be that person. She just might remain in a coma over the year that passes during the time jump, so it looks like Princess Gina will have done some serious damage.

Of course, this all begs the question of what exactly is on that flash drive that’s so important and worth possibly killing Jennifer for. It will be interesting to see how DOOL handles the issue of Jennifer’s coma and the flash drive mystery vis a vie the time jump. It will certainly require some creative storytelling, and we may get a few surprises along the way.

What do you think is on that flash drive? Stay tuned to DOOL and don’t forget to check CDL often for the latest Days of Our Lives spoilers, updates, and news.