Days of Our Lives Spoilers: Kate and Maggie Face Off in Bitter Battle – Titanic Clash Over Sarah and Rex

BY hellodrdavis on April 24, 2019 | Comments: one comment
Related : Days of Our Lives, Soap Opera, Spoiler, Television 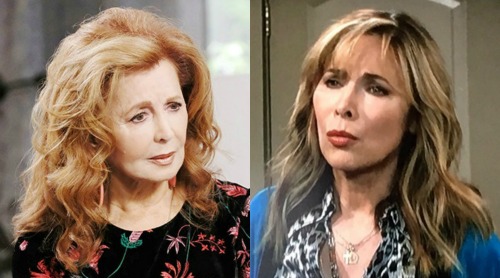 Days of Our Lives (DOOL) spoilers tease that Maggie Kiriakis (Suzanne Rogers) will be at her wit’s end. She’s put up with a lot from Victor Kiriakis (John Aniston) over the years. He’s repeatedly promised to make better decisions and let go of old patterns.

Of course, Victor was a ruthless business man in Salem for years, and although he has softened a bit in later years (and since marrying Maggie), there’s still a ruthless side to him.

And Victor’s ruthless side came out recently when he re-hired Kate Roberts (Lauren Koslow) at Titan Industries. Kate approached Victor wanting to come back to work at Titan so they could team up to bring down Stefan DiMera (Brandon Barash). Kate absolutely hates Stefan and would do anything to bring him to his knees.

But Maggie isn’t happy about Kate hanging around Victor again. Kate is Victor’s ex-wife, and Maggie would prefer that she not be around Victor because she tends to bring out the worst in him. Plus, Kate and Maggie don’t exactly get along.

Kate thinks that Maggie wants to turn Victor into a wimp, and Maggie thanks that Kate wants to corrupt Victor. There’s definitely no love lost there.

Well, according to Days of Our Lives spoilers, Maggie will get fed up with Kate and the two will hash things out face to face. It will be an ugly scene as the two women essentially fight over Victor, and you just know that Victor will be amused by the whole scene. He already thinks that Maggie is jealous, so their fight will only reinforce that belief.

But DOOL spoilers say that Victor won’t be all that Maggie and Kate spar over. It appears that their children will come up in the argument as well, which will take their fight to the next level.

Of course, Maggie is Sarah Horton’s (Linsey Godfrey) mother, and Kate is Rex Brady’s (Kyle Lowder) mother. And Maggie hasn’t been too happy with Rex ever since she found out that he cheated on Sarah twice.

Look for Maggie to throw Rex’s cheating in Kate’s face during their argument. Of course, that won’t go over well, and Kate will probably fight back hard. She may insult Sarah as a goody-two-shoes, as she frequently insults Maggie on the same grounds. Days of Our Lives spoilers indicate that we’re in for a titanic fight between the ladies, as they totally get into it over their kids.

Who are you rooting for in this fight? Maggie or Kate? Stay tuned to DOOL and don’t forget to check CDL often for the latest Days of Our Lives spoilers, updates, and news.