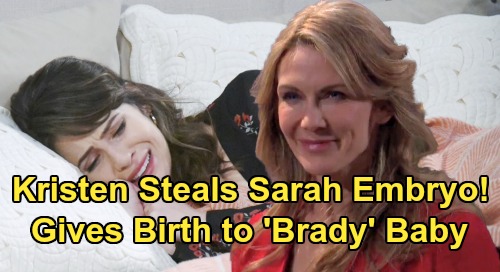 Days of Our Lives (DOOL) spoilers reveal that a time jump will shake up Salem down the road. It looks like the show will leap one year ahead, so that’ll definitely affect how several storylines play out. There’s on in particular we want to focus on, and that’s Sarah Horton’s (Linsey Godfrey) pregnancy.

Kristen DiMera (Stacy Haiduk) will likely cook up a little baby drama of her own with Dr. Wilhelm Rolf’s (William Utay) help. Now we know Kristen isn’t in the ideal age range for baby-making, but that doesn’t matter. It wasn’t believable when Bonnie Lockhart (Judi Evans) passed off her granddaughter as her daughter, but DOOL did that, too. Most of us have learned to roll with whatever the campy soap offers.

Regardless, Days of Our Lives spoilers say Kristen will try to win Brady Black (Eric Martsolf) over with the one thing he can’t turn his back on. She can’t have children of her own – at least not without some DiMera doctor magic. However, Kristen and Dr. Rolf may get an assist from Sarah on this.

During the week of September 23-27, Days spoilers state that Sarah will decide to get an abortion. She won’t want to ruin Eric Brady’s (Greg Vaughan) happy ending with Nicole Walker (Arianne Zucker) by blowing up his world. Sarah will just want to end her pregnancy quietly and move on with her life.

Meanwhile, Kristen will be prepped for a peculiar procedure. DOOL fans know Kirsten once stole Theresa Donovan’s (Jen Lilley) embryo, which allowed her to give birth to “Christopher DiMera.” After the truth came out, Christopher was returned to his rightful parents and became Tate Black.

Is Days about to do something similar here? Perhaps Sarah will merely think she had an abortion. In reality, Kristen may end up carrying Sarah and Eric’s baby – and passing it off as Brady’s! Kristen can argue that this child is a miracle and use it to claim they’re meant to be together.

There’s no word yet on when the time jump will strike, but it’s the twist referenced in the fall promo. It sounds like this will air during the fall mayhem as promised. The time jump should allow us to skip some of the usual pregnancy stuff. DOOL can work through that quickly and get us to post-birth chaos.