Days of Our Lives Spoilers: Lani Wants To Raise Jordan’s Baby David As Her Own – Eli Objects 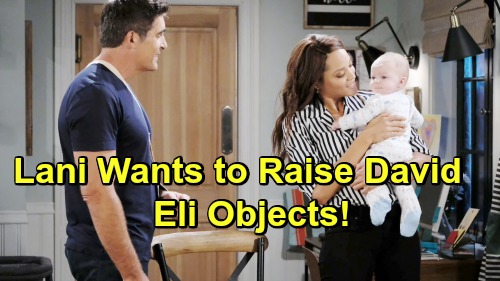 Days of Our Lives (DOOL) spoilers tease that Eli Grant (Lamon Archey) will get a big shock. He has been missing his girlfriend Lani Price (Sal Stowers) lately, as she’s been consumed with taking care of Jordan Ridgeway’s (Chrishell Hartley) baby. Jordan is having mental health difficulties right now and can’t take care of her baby boy, so Rafe Hernandez (Galen Gering) and Lani have been caring for the baby.

From Eli’s perspective, Lani has been obsessing over the baby, who shares the name “David” with the baby that Lani and Eli lost last year. It’s one thing to help out with David here and there, but Lani has been seemingly spending every waking moment with him. She’s even stayed overnight at Rafe’s house to care for David.

According to Days of Our Lives spoilers, Eli will start to get fed up with Lani’s behavior. In the coming days, look for Lani to move into Rafe’s house and take a leave of absence at work, all so she can take care of David. Eli simply won’t understand why Lani needs to be the person to be with David 24/7, and the couple will experience friction as a result.

While Lani’s devotion to David starts to drive a major wedge between herself and Eli, it seems that she won’t fully appreciate the seriousness of the rift. She’ll apparently just think that Eli is being irrational and jealous, and it looks like she’ll brush off his concerns, much to Eli’s chagrin. Worse, she’ll get closer to Rafe at the same time that she and Eli are drifting apart.

But according to DOOL spoilers, Lani will really irk Eli when she makes a significant request of him. It looks like she’ll suggest that they raise baby David together, perhaps as co-parents with Rafe. Eli probably won’t be able to believe his ears. After all, David has a mother who hopefully be able to take care of him someday.

Lani’s request will likely solidify for Eli that Lani is just too attached to David. For Eli, this could be a deal-breaker in their relationship. All he really wants is to spend time with his girlfriend one-on-one, and Lani’s devotion to David is making that impossible.

Do you think that Lani and Eli will break up over Lani’s devotion to David? Stay tuned to DOOL and don’t forget to check CDL often for the latest Days of Our Lives spoilers, updates, and news.