Days of Our Lives Spoilers: Leo’s Big Secret Revealed – Killed His Own Father?

BY hellodrdavis on January 31, 2019 | Comments: one comment
Related : Days of Our Lives, Soap Opera, Spoiler, Television 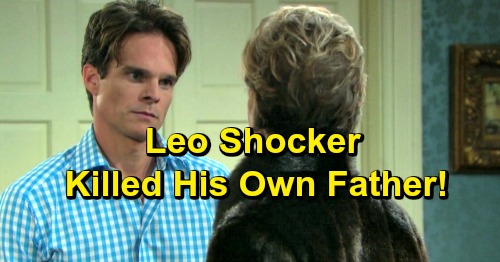 Days of Our Lives (DOOL) spoilers tease that Leo Stark (Greg Rikaart) is shaking in his boots now that his mother Diana Cooper (Judith Chapman) has blown into Salem. Diana was the last person that Leo – or should we say Matthew Cooper, which is Leo’s real name – expected to show up on his doorstep. And it was clear from his horrified reaction to her appearance that he doesn’t want her ruining the good thing that he’s got going with Sonny Kiriakis (Freddie Smith).

Of course, Leo blackmailed Sonny into marrying him. He’s been threatening to expose how Sonny and Will Horton (Chandler Massey) “killed” him and tried to dispose of his body. He won’t hesitate to go to the press with the information, so Sonny has to stay married to him and let him keep living the good life. It’s a real scam.

But Diana coming to town is a game changer for Sonny and Will, because they suspect that she may know something about Leo that will put him in a position of weakness relative to them. If they can just find something incriminating on Leo, then they have a chance of getting Leo to stop blackmailing them.

Well, it looks like Diana certainly does have something incriminating on Leo. Judging by Leo’s reaction to Diana, there’s something he clearly doesn’t want her to spill about him. These two have a big secret, and it’s only matter of time before Diana lets the cat out of the bag.

But what could that secret be? Could it have something to do with Mr. Cooper, Leo’s father? Days buzz is that Leo was involved in the death of his dear old dad, and that Diana may have incriminating evidence that Leo killed him. That certainly sounds like something that Leo might have done, especially if Mr. Cooper stood in the way of Leo getting something that he wanted…like an inheritance, for example.

If Leo did kill his dad and Diana has evidence of it, then that would be pretty damning information and would absolutely threaten the scam that Leo’s got going with Sonny and Will. But of course, that means that Diana has to be willing to turn on her son, and from the looks of it so far, that shouldn’t be a big problem.

Do you think that Leo killed his own father? Stay tuned to DOOL and don’t forget to check CDL often for the latest Days of Our Lives spoilers, updates, and news.