Days of Our Lives Spoilers: Leo’s Mom Shocker – Will and John Discover The Dirt 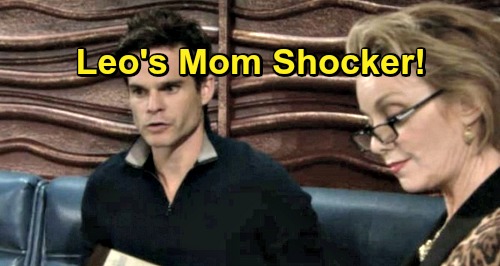 Days of Our Lives (DOOL) spoilers tease that Will Horton (Chandler Massey) will reach his breaking point when it comes to Sonny Kiriakis (Freddie Smith) and Leo Stark’s (Greg Rikaart) marriage. Sonny reluctantly married Leo after Leo blackmailed him with the surveillance photos of Will and Sonny rolling Leo’s body up in a rug. Leo’s now living the good life in the Kiriakis mansion to both Sonny and Will’s dismay.

Of course, all Will wants is to be with his true love Sonny, but scheming Leo is standing in their way. Leo insists that Will and Sonny stay away from each other, so the two of them can’t even see each other on the side.

But Will is going to get fed up with this arrangement, and he’ll enlist the help of John Black (Drake Hogestyn). He’ll hope that John can dig up some dirt on Leo that they can use to put an end to the sham marriage between Sonny and Leo. Plus, they already have an idea of what John should look for.

Recently, Leo mentioned his mother to Sonny, and he wasn’t too enthusiastic about her to say the least. Apparently, Leo and his mother are estranged, and Leo indicated that he didn’t have the best childhood. Sonny and Will are hoping that finding Leo’s mom might be the key to getting him out of their lives for good.

According to Days spoilers, they will indeed have luck with the mom angle. Judith Chapman, who previously portrayed Anjelica Deveraux on Days, will join the show again to portray Diana Cooper, Leo’s mom. It seems that John will not only find Diana, but he’ll bring her to Salem.

It will be interesting to see Leo interact with his estranged mother. Perhaps Diana can offer some insight into how Leo got to be so smarmy, as well as some ammunition that WilSon can use against Leo to get him out of their lives for good.

Are you looking forward to seeing Leo’s mom arrive in Salem? Stay tuned to DOOL and don’t forget to check CDL often for the latest Days of Our Lives spoilers, updates, and news.