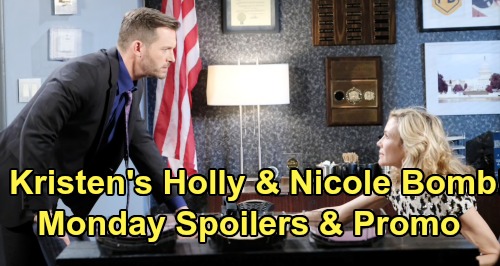 Days of Our Lives (DOOL) spoilers for Monday, August 26, tease that Kristen DiMera (Stacy Haiduk) will leave Brady Black (Eric Martsolf) in shock. He just demanded a confession in the police interrogation room, but he won’t get the one he expects. Kristen’s about to deliver an explanation that rocks Brady to the core!

Brady wants Kristen to admit that she was behind the deaths of Holly Jonas (Harlow and Scarlett Mallory), Nicole Walker (Arianne Zucker) and Ted Laurent (Gilles Marini). Instead, Days of Our Lives spoilers say Kristen will confess two of the victims are alive and well. She’ll insist that Holly’s death was faked and Nicole survived the fire. As for Ted, Kristen will rat Tony DiMera (Thaao Penghlis) out for killing him.

Later, Days spoilers state that Tony will be placed under arrest. Ted’s death was an accident since the gun simply went off in the struggle, but there’s no proof of that. Tony will definitely be in a tight spot once Kristen points the cops in his direction. He’ll tell Anna DiMera (Leann Hunley) about the tricky Ted situation and all the pressure he was under, so she’ll do her best to help.

Of course, Brady will want to know Nicole and Holly’s location, but Kristen can’t just spill all her secrets. She’ll save that piece of the puzzle to help her out of her jam. Kristen will hope to cut a deal with newly reinstated DA Melinda Trask (Laura Kai Chen). She’ll be willing to give up info that could lead to Nicole and Holly’s safe return, but only if she can walk out of there as a free woman.

Over with Xander Cook (Paul Telfer), he’ll face an incensed mother and daughter! Maggie Kiriakis (Suzanne Rogers) and Sarah Horton (Linsey Godfrey) will blast Xander over is cruel deception on Monday. Days of Our Lives spoilers say they’ll be appalled, especially on the topic of Holly. However, Xander will eventually insist that Holly is alive, so that’ll bring another round of questions and conflict.

Finally, Will Horton (Chandler Massey) and Sonny Kiriakis (Freddie Smith) will praise Susan Banks’ (Stacy Haiduk) for saving the day. Susan rescued Marlena Evans (Deidre Hall) from Kristen’s clutches, so she deserves a good pat on the back. Since she truly adores Will, DOOL spoilers say his approval will warm her heart.