Days of Our Lives Spoilers: Monday, June 10 Update – Eli Catches Ben with the Lighter, Arrests Hero – Haley Deportation Back On 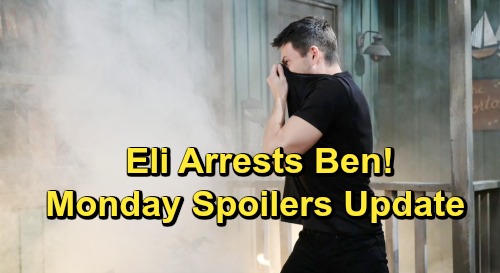 Days of Our Lives (DOOL) spoilers update for Monday, June 10, tease that Sonny Kiriakis (Freddie Smith) won’t get what he’s looking for. Despite his deadly threat, Eve Deveraux (Kassie DePaiva) doesn’t have Dr. Wilhelm Rolf’s (William Utay) diary and can’t hand it over. Sonny will eventually give up and return to Will Horton’s (Chandler Massey) hospital room. He can’t afford to lose any more time with his love.

By the time Sonny arrives, Will will be ready to share a new perspective. He’s been having a few mood swings due to his tumor, but he’s also been genuinely frustrated by his looming death. It seems unfair since Will finally made his way back to Sonny after being presumed dead once before.

Now Will knows he may only have a few days left to live. He’s been feeling sorry for himself, but he’ll decide that has to stop. Will’s wasting precious moments, so he’ll choose to start valuing those hours, minutes and seconds. He’ll make them all count – starting with a marriage proposal. Days of Our Lives spoilers say Will’s going to pop the question, so Sonny will happily accept.

While Will and Sonny plan their hospital wedding, Ben Weston (Robert Scott Wilson) will find the aftermath of Claire Brady’s (Olivia Rose Keegan) actions. Days spoilers state that the fire will spread rapidly at the Horton cabin. Claire will get out of there immediately – or at least get far enough away so she won’t be spotted.

As for Ben, he’ll approach the front of the cabin and notice the lighter on the ground below. Ben will carefully pick it up with a handkerchief to avoid getting his own fingerprints on it. However, it won’t matter since Eli Grant (Lamon Archey) will catch Ben red-handed. At least he’ll think he’s caught Ben red-handed! In reality, Ben will be a victim of poor timing and rotten luck.

Days of Our Lives spoilers say Eli will order an officer to take Ben into custody. Ben will be arrested and dragged back to the Salem PD right away. That’ll leave Eli to finish the job Ben would’ve done if he’d had the chance. Haley Chen (Thia Megia) and Tripp Dalton (Lucas Adams) will be trapped inside the burning cabin, so they’ll get help from Eli and his backup team.

It appears Haley will need lifesaving CPR due to smoke inhalation, but Eli will make sure she survives. Unfortunately, DOOL fans know ICE will have to be notified about all of this. Haley’s deportation will get back on track, so she’ll know what’s waiting for her when she gets out of the hospital.

Tripp will also be arrested early this week, so he’ll pay the price for trying to help Haley get her green card and ultimately flee the country. We’ll give you updates as other Days news comes in. Stay tuned to DOOL and don’t forget to check CDL often for the latest Days of Our Lives spoilers, updates and news.