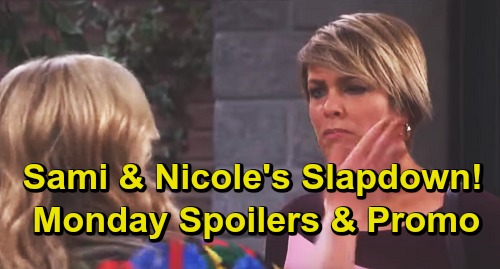 Days of Our Lives (DOOL) spoilers for Monday, June 24, tease that Ted Laurent (Gilles Marini) will plead for his life. Xander Cook (Paul Telfer) was clearly uncomfortable with the idea of killing Ted, but Kristen DiMera (Stacy Haiduk) insisted and now Ted’s got a gun pointed at him. He’ll freak over the possibility of dying and hope he can wiggle out of this somehow.

Ted will beg Xander to lower his weapon and truly think about this. He’ll suggest Xander doesn’t really want to pull the trigger, which is true. Days of Our Lives spoilers say Ted will manage to tug at Xander’s heartstrings a bit. DOOL fans know Xander has a softer side, so we’ll see that shine through as he bonds with his intended victim.

Days of Our Lives spoilers say old wounds will reopen as Sami spars with “Nicole.” Of course, Kristen is currently pretending to be “Nicole” as part of her scheme, but that won’t matter. There’ll be just as much rage between Kristen and Sami. In fact, Sami will push “Nicole” too far and earn herself a hard slap. Moments later, Sami will deliver a slap in return as this showdown gets out of hand.

“Nicole” will barely be able keep her mask on, but her secret will remain under wraps for now. Speaking of secrets, Kate Roberts (Lauren Koslow) will hope to find some in “Nicole’s” room. She’ll do some digging, but it won’t be long until she gets busted. “Nicole” will return and wonder what in the world Kate thinks she’s doing.

At the hospital, Rex Brady (Kyle Lowder) will drop a bomb on Eric Brady (Greg Vaughan). He’ll tell his brother that he intends to marry Sarah Horton (Linsey Godfrey) immediately. Rex will hope Eric can officiate in the chapel, so Eric will cave in and go along with this awkward Days wedding.

Another exciting episode is coming up, so don’t miss all the action. We’ll give you updates as other Days news emerges. Stay tuned to DOOL and don’t forget to check CDL often for the latest Days of Our Lives spoilers, updates and news.