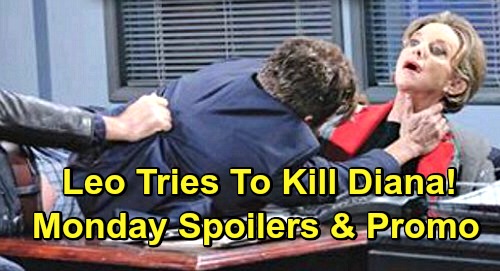 Days of Our Lives (DOOL) spoilers for Monday, March 25, tease that John Black (Drake Hogestyn) will leave Diana Cooper (Judith Chapman) reeling. She thought she could sneak in Hope Hernandez’s (Kristian Alfonso) office and snatch the incriminating IV bag, but John was there waiting with the evidence. He’ll confront Diana about poisoning Dr. Marlena Evans (Deidre Hall) and wonder what she has to say for herself.

Diana will undoubtedly deny John’s accusations and come up with some story to explain what she’s up to. However, John won’t buy it. He’ll argue that the cops aren’t going to buy it either when they get confirmation on her fingerprints. Days spoilers say Leo Starke (Greg Rikaart) will join this confrontation eventually. That’s when Diana will make a stunning confession – stunning to Leo at least!

DOOL fans won’t be surprised to hear that Diana lied about Leo’s paternity. Leo, on the other hand, will be caught off guard. Thanks to the DNA test, he truly believed John was his father. Leo will be crushed since he thought he finally had a dad he could count on. He was excited about the prospect of a relationship since Leo’s real father was such a horrible man.

When Leo discovers it was all a scheme, he’ll lunge at Diana on a mission for vengeance. Fortunately, John will stop Leo from killing another parent. Days of Our Lives spoilers say Leo will ultimately back off, but he’ll be more furious than ever.

Across town, Stefan DiMera (Brandon Barash) will strengthen his connection with Chloe Lane (Nadia Bjorlin). As they share another close moment, Brady Black (Eric Martsolf) will waltz in. He won’t like the intensity he sees, so he’ll push Stefan’s buttons and try to talk some sense into Chloe. Brady will feel like Chloe’s crazy for trusting a guy like Stefan, but Chloe will insist she knows what she’s doing.

Over with Rafe Hernandez (Galen Gering), he’ll do a little digging. Days of Our Lives spoilers say Ted Laurent (Gilles Marini) will remain a thorn in Rafe’s side, so Rafe will decide to do something about it. He’ll hope he can uncover some dirt and find a way to get rid of Ted for good.

DOOL viewers won’t want to miss Monday’s exciting episode. We’ll give you updates as other Days news comes in. Stay tuned to the NBC soap and don’t forget to check CDL often for the latest Days of Our Lives spoilers, updates and news.