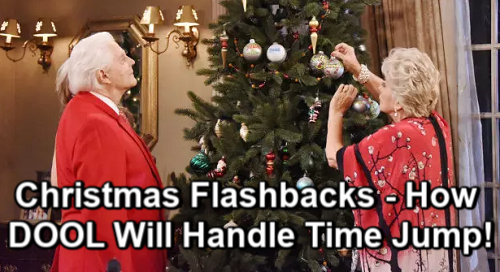 Days of Our Lives (DOOL) spoilers reveal that ever since fans learned about the looming time jump, there have been plenty of questions – and not just about who will be paired up! DOOL is creating a tricky dilemma since the characters will know things viewers aren’t privy to.

Thanksgiving and Christmas will be here before you know it, so there have also been some worries about the upcoming celebrations. However, the time jump has been confirmed to be a one-year leap.

That means Days won’t skip all the usual festivities. It’ll simply be 2020 in Salem – although it’s doubtful they’ll actually mention the year. That’ll make it easier to gloss over the detail down the road.

DOOL Will Show Viewers What Happened When The Show Skipped

On Jason47’s Days Facebook page, he also confirmed the upcoming Christmas merriment will bring newly created flashbacks of the previous year. In other words, Days of Our Lives will show what’s happening after the time jump, but we’ll see what the show skipped as well. That should bring some fun surprises as these stories progress.

It’s never too early to start thinking about how Days will handle the holiday season. You can count on DOOL to deliver the usual Horton tree trimming and plenty of warm family moments.

As for the time jump itself, that’ll take place on November 8. That’s the daytime drama’s 54th anniversary, so it’s certainly a fitting date to do something special and shake things up.

Plus, that’ll allow some time for fans to adjust before the holidays. We can all wrap our heads around the shift and just appreciate the merriment in town. Of course, there’ll undoubtedly be a few Salemites who have a blue Christmas. Heartbreak and jealousy should dampen the holiday joy for several glum characters, but others will be on cloud nine.

Days of Our Lives spoilers say this time jump could be a nice jolt that keeps people interested. It’s a bit of a stunt, but it’ll actually speed up the payoff of current storylines. That should ultimately be a good thing, so hang on and enjoy the ride!