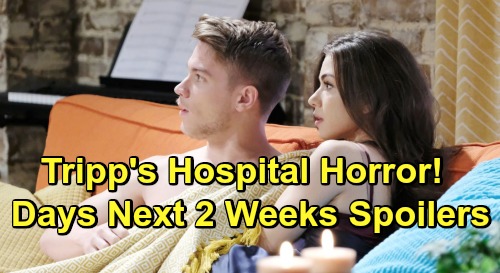 Days of Our Lives (DOOL) spoilers for the next two weeks tease that things are about to get dangerous in Salem. During the week of June 24-28, Marlena Evans (Deidre Hall) will hear about a terrible plan. She’ll pry some details out of Ben Weston (Robert Scott Wilson) and instantly worry about the safety of those involved.

Unfortunately, Ciara and Tripp will underestimate just how far gone this girl is! Claire’s mental state has been rapidly declining, so this will all explode once she sees Tripp and Ciara’s staged scene. They’ll be scantily-clad under the covers on the sofa – much like the time Ciara spotted Claire and Tripp before her motorcycle accident.

That crash led to Ben’s rescue and Claire’s first murder attempt, so Days is bringing everything back around here. Claire will grab a knife from the kitchen and hold it to Tripp’s throat. Shawn Brady (Brandon Beemer) will rip into Tripp later, so he probably won’t be hurt too badly. Even so, Tripp may have some injuries that need medical attention.

During the week of July 1-5, Kayla Johnson (Mary Beth Evans) will be responsible for Tripp’s care. She’ll tend to her stepson, which could mean Claire’s actions will put him in the hospital. Back with Claire, she’ll basically have a breakdown as Belle Black (Martha Madison) joins Shawn in Salem. Belle will feel horrible for her time in Hong Kong since she missed all the warning signs.

Other Days of Our Lives spoilers say Jack Deveraux (Matthew Ashford) will keep a secret from Eve Deveraux (Kassie DePaiva). When she realizes her husband’s been hiding something, Eve will demand some answers. She really doesn’t have a right to be outraged here since she’s kept plenty of secrets from Jack, but DOOL fans know how Eve is. She sees everyone’s wrongdoing but her own.

Days of Our Lives spoilers say the Brady and Horton barbecue will also get underway. Rex Brady (Kyle Lowder) and Sarah Horton (Linsey Godfrey) will be married by then, so it’ll be the first event they’re hosting as husband and wife. The problem is Sarah will still be in love with Eric Brady (Greg Vaughan). Xander Cook (Paul Telfer) will keep up his pursuit of Sarah as well, so her love life’s beyond messy!

Hope Brady (Kristian Alfonso) will get a shocking clue when she spots a necklace, which Sarah will reveal was a gift from Xander. There’s a good chance this necklace is the one Ted Laurent (Gilles Marini) offered Hope. She’ll likely recognize it and start connecting the dots surrounding Ted’s disappearance.

It sounds like the drama’s about to heat up. We’ll give you updates as other Days news comes in. Stay tuned to DOOL and don’t forget to check CDL often for the latest Days of Our Lives spoilers, updates and news.