Days of Our Lives Spoilers: ‘Nicole’ Confirmed to Be Kristen DiMera in a Mask – Sneaky Schemer Slips Up

BY Heather Hughes on May 22, 2019 | Comments: 2 comments
Related : Days of Our Lives, Soap Opera, Spoiler, Television 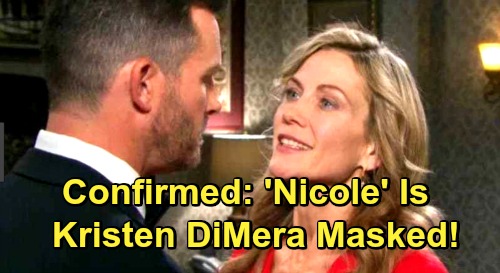 Days of Our Lives (DOOL) spoilers tease that Nicole Walker (Arianne Zucker) will continue to blast Eric Brady (Greg Vaughan). Of course, DOOL fans know this is an elaborate scheme. In fact, “Nicole” is now confirmed to be Kristen DiMera (Stacy Haiduk) in a mask, so she’s just using Holly Jonas’ (Harlow and Scarlett Mallory) “death” to get what she wants.

Kristen will make her many secrets work to her advantage. Days of Our Lives spoilers say “Nicole” will pull Brady Black (Eric Martsolf) closer as part of her plan. After a hot kiss, Brady will face familiar feelings and worry about the tension exploding with Eric again.

Kristen is a great schemer anyway, but she’s also got the appearance of grief on her side. After all, if Nicole were really mourning the loss of her beloved daughter, she would naturally exhibit some unusual behavior. “Nicole’s” persistent rage isn’t raising red flags as a result.

The rest of Salem just assumes “Nicole” is so distraught that she’s blaming Eric for everything. Kristen could get away with this for quite some time. Fortunately, nothing stays hidden forever on a soap. It’s just a matter of time until other characters start putting the clues together and sense that something’s not right.

Days of Our Lives spoilers say Eric will once again try to make peace with “Nicole.” He’ll reach out to her on May 31 and hope she’s cooled off enough to listen. Eric will assure “Nicole” that he never meant for any of this to happen. He was only trying to do what was best for Holly, even it doesn’t look that way now.

Kristen should stand her ground, but will she slip up, too? It’s surprising that Eric – who considers Nicole the love of his life – hasn’t noticed any significant changes yet. We mentioned that “Nicole’s” grief is clouding everyone’s judgment, but Eric was even duped before Holly’s “death.”

At some point, there’ll have to be a hint that tips Eric off. Brady will certainly be a crucial part of this hot plot, but Days can’t just cast Eric aside. If they want to keep the popular “Ericole” love story going, Eric needs to take on a deeper role in learning the truth.

Eric is bound to get suspicious of “Nicole” aka Kristen eventually, so don’t miss the twists and turns ahead. We’ll give you updates as other Days news comes in. Stick with DOOL and don’t forget to check CDL often for the latest Days of Our Lives spoilers, updates and news.