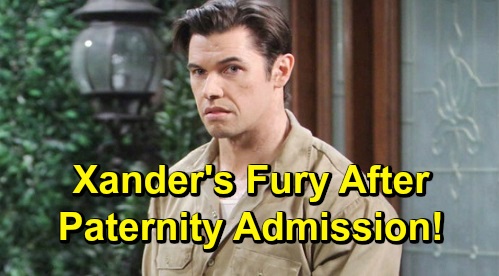 Naturally, it’s going to unleash chaos when Nicole reveals the truth – and she will! As CDL previously predicted, Days of Our Lives spoilers say Eric Brady (Greg Vaughan) will pop the question during the week of November 25-29. He’ll ask Nicole to marry him, but it looks like she’ll drop the bomb before she accepts. Nicole just won’t be able to keep this to herself anymore.

Days of Our Lives spoilers say Nicole will tell the whole ugly story. She’ll admit she’s known that Sarah’s baby was Eric’s for over a year. Eric will be floored when he realizes Nicole’s kept something so important from him. He’ll need time to mull this over before he can figure out what’s next.

Of course, it won’t be long until Xander realizes what Nicole’s done. Days of Our Lives spoilers say Xander will fly off the handle. He’ll corner Nicole and demand to know why she spilled the beans after all this time. Nicole may insist Eric had a right to hear the truth, especially if they were going to get engaged. She may argue that she didn’t want to take a step that huge with a secret like this between them.

Nicole might insist that secrets have a way of getting out and destroying everything you love. She’d rather lose Eric knowing she came clean than live in fear forever. Days of Our Lives spoilers say Eric will get over Nicole’s deception eventually, but her warning could hit hard for Xander – who most likely switched dead Sarah’s baby for Kristen DiMera’s (Stacy Haiduk) live one that fateful night.

For the time being, Xander will be focused on the immediate threats to his romance. He’ll wiggle out of his upcoming confession, which Clyde Weston (James Read) will force through the kidnapping drama. That’ll leave Eric as Xander’s main concern. Xander will just have to make sure they don’t get too close by bonding over Mickey.

Eric’s bound to be furious with Sarah for hiding Mickey’s paternity, so Xander will have that hurdle going for him. Even so, babies have a way of bringing people together on soaps. Xander will blast Nicole after her confession because he’ll know a “Seric” reunion is possible. That’s something Xander and most DOOL fans don’t want to see!