BY Heather Hughes on May 23, 2019 | Comments: 3 comments
Related : Days of Our Lives, Soap Opera, Spoiler, Television 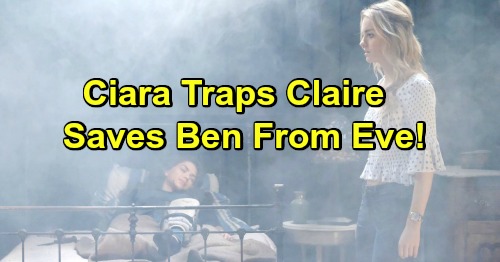 Days of Our Lives (DOOL) spoilers tease that Ciara Brady (Victoria Konefal) will remain in Ben Weston’s (Robert Scott Wilson) corner. He’s going to need her more than ever since the police commissioner will be targeting him. Eve Deveraux’s (Kassie DePaiva) new role in Salem will send her on the ultimate power trip. Her vengeful mission will definitely leave Ben in a bind.

Fortunately, Days will give Ben some clues about the true fire-starter. After spotting Claire Brady (Olivia Rose Keegan) trying to burn Tripp Dalton’s (Lucas Adams) clothes, that’ll send up some arsonist red flags. Days of Our Lives spoilers say additional hints could come through a hypnosis session. Ben will be doing everything he can to protect himself and prove Claire’s the true culprit.

DOOL fans can expect Ciara to be brought in the loop next week, May 27-31. Ben will divulge his suspicions, so that could lead to some suspicions from Ciara as well. Once she gets past her initial burst of doubt, Ciara should see all the warning signs. She’ll have to consider the idea that Claire might’ve attempted her murder.

At first, Ciara may play it cool and try to monitor Claire’s activities. She might want to avoid tossing around accusations until she’s absolutely sure. The only way to take Claire down is through solid evidence or a confession, so Ciara can’t just make unfounded claims.

However, Ciara’s plan could change as Eve’s pressure rises. The harder Eve fights to put Ben behind bars, the more Ciara will want the real story to come out. Will Ciara eventually confront Claire about her fiery actions? If she gets a denial, will Ciara set a trap in hopes of catching Claire and making her pay?

Days of Our Lives spoilers say Ciara’s loyalty will lie with Ben, who’s innocent in this cabin blaze drama. Claire did the crime, so she needs to do the time! Since we know Claire is leaving the NBC soap, prison or at least a mental institution stint may be in her future

It sounds like things are about to heat up on the NBC soap. We’ll give you updates as other Days news comes in. Stay tuned to DOOL and don’t forget to check CDL often for the latest Days of Our Lives spoilers, updates and news.