BY Heather Hughes on May 31, 2019 | Comments: one comment
Related : Days of Our Lives, Soap Opera, Spoiler, Television 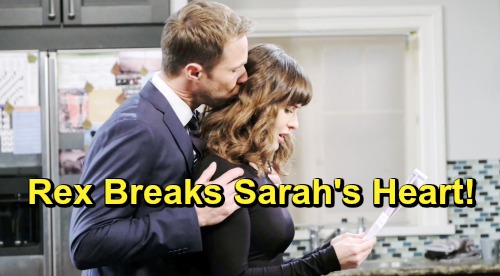 Days of Our Lives (DOOL) spoilers tease that Chloe Lane (Nadia Bjorlin) will share some warm moments with Dr. Rex Brady (Kyle Lowder). During the week of June 10-14, these two will get closer. Days fans know Rex and Chloe have had some nice conversations here and there, but everything’s been friendly so far. Could that change soon enough?

Rex cheated with his ex, Mimi Lockhart (Farah Fath), and ended up getting her pregnant. In a double blow, Rex also slept with Dr. Sarah Horton’s (Linsey Godfrey) sister. She was appalled to learn Rex slept with Noelle Curtis, so his cheating ways definitely brought trust issues.

However, Sarah has been known to make some bad romantic calls as well. She slept with Eric Brady’s (Greg Vaughan) worst enemy, Xander Cook (Paul Telfer), which she now views as a terrible decision. Of course, Sarah has also kissed Eric behind Rex’s back – including one smooch that wasn’t too long ago.

Eric admitted he was still in love with Nicole Walker (Arianne Zucker), so he’s not interested in pursuing anything with Sarah right now. Since Kristen DiMera (Stacy Haiduk) is posing as Nicole and will continue to reject Eric, Days of Our Lives spoilers say he’ll have to battle a broken heart for a while. Eric may have a hard time letting go of Nicole, so Sarah’s chance with him may not pan out.

Rex, on the other hand, could have a new cheating opportunity on the horizon. Will he be tempted by Chloe? Some people say once a cheater, always a cheater. Nobody would be surprised if that was true for Rex.

Days of Our Lives spoilers say Rex and Sarah will still be together by the time the July barbeque rolls around, but what about after that? We’ll have to wait and see, but Sarah should probably be wary of hose close Rex and Chloe are about to get. That’s probably not a good idea when Rex clearly struggles to control himself.

Sarah may face another devastating DOOL betrayal if Rex lets it get that far. She may end up bitter and single, but that might be just the opening Xander needs. If Sarah is disgusted with Rex and her life in general, she might hit the sheets with Xander again. Why shouldn’t Sarah have some fun if her world falls apart? She should take comfort any way she can get it!

Do you think Rex will betray Sarah with Chloe? Will this cheater strike again? We’ll give you updates as other Days news comes in. Stay tuned to DOOL and don’t forget to check CDL often for the latest Days of Our Lives spoilers, updates and news.