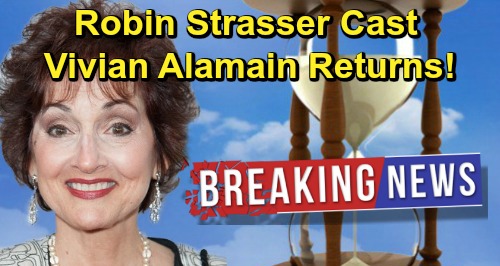 Days of Our Lives (DOOL) spoilers tease that a recast may be in the works. Thanks to an Instagram story posted by a cast member, we know Robin Strasser has been at the Days studio. You may recognize Strasser from her other soap roles on One Life to Live, All My Children and Passions.

DOOL insiders back up the idea that Strasser has joined the cast, which makes sense considering there’s no reason for her to visit without filming. It’s not like when a departing actor chooses to pop back in and see all his or her old costars. Plus, the video was filmed in the makeup room, so we can pretty much be certain Strasser is playing a role. The question is: which one?

It’s possible Strasser is portraying a brand-new character, but we haven’t seen too many of those lately. Leo Stark (Greg Rikaart) was a new addition, but he turned out to have a link on canvas through Diana Cooper aka Diana Colville (Judith Chapman). Days could’ve just made Leo’s mom a random woman, but they went the recast route and brought Diana back instead.

That’s because it’s easier to create stories when characters have connections. Diana’s old bond with John Black (Drake Hogestyn) will bring plenty of drama. She’ll stir the pot for Leo as well as John and Dr. Marlena Evans (Deidre Hall) in the coming weeks. There’s a good chance Strasser is also playing a returning character, so let’s consider which part she might take over.

Vivian Alamain (last played by Louise Sorel) would be a great option. Kate Roberts (Lauren Koslow) shot and killed Vivian, but a good dose of back-to-life serum saved her. Vivian apparently wasn’t as far gone as victims like Will Horton (Chandler Massey), Jack Deveraux (Matthew Ashford) and EJ DiMera (James Scott). She woke up somewhere and clearly recognized the person who visited her.

That tells us that Vivian’s memories were still intact, but she was still most likely held at that warehouse with the others. One of the mystery doors had the initials “VA” on it, so Vivian may have been held prisoner there. Of course, this sets up the possibility of a return, but there’s a bit of a problem.

Sorel wasn’t pleased with her last stint and hinted in an interview with Soap Opera Digest that she probably wouldn’t come back. Luckily, that problem can easily be remedied with a recast. Perhaps that’s where Strasser will come in. She’s got the right look for Vivian and the timing is right.

Brandon Barash hasn’t debuted as a Stefan DiMera (currently played by Tyler Christopher) recast yet, but word has it he’s already on his way out. Days of Our Lives films several months in advance, so changes are always brewing well before things hit the screen. Since Vivian is Stefan’s mother, perhaps Strasser will take over the role as part of Stefan’s exit story.