Days of Our Lives Spoilers: Sarah Reunites with Rex, But Eric and Xander Are Pining – See Who Wins Battle for Sarah’s Heart 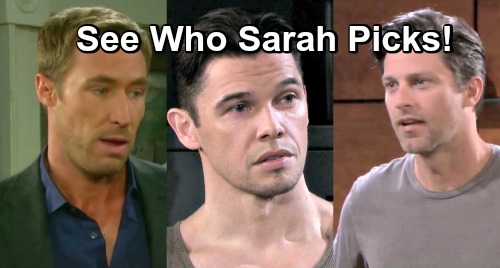 Days of Our Lives (DOOL) spoilers tease that Rex Brady (Kyle Lowder) will grow suspicious of Eric Brady’s (Greg Vaughan) connection with Sarah Horton (Linsey Godfrey). DOOL fans know Eric and Sarah just had a falling out, but they were on great terms before. In fact, it looked like they were inching toward a solid romance.

Sarah’s decision to sleep with Xander Cook (Paul Telfer) was a huge setback. She held her own in her fight with Eric, but she’s remorseful deep down. Sarah can understand just how much pain she caused by sleeping with Eric’s worst enemy. She now knows how easy it is to make a mistake in the heat of the moment.

That should soften Sarah’s stance on Rex’s betrayals, but a big confrontation’s coming up first. Days of Our Lives spoilers say Rex will spot some condoms and corner Sarah. He’ll want some answers about who she’s been sleeping with. Since Sarah and Eric have been getting so close, Rex will naturally suspect that she got in bed with his brother.

That was actually the plan, but Eric refused to go along with it. Sarah may even admit that. When it comes to mistakes, Sarah would have to make a few more giant ones to catch up with Rex. There’s no reason she shouldn’t be honest here.

Days of Our Lives spoilers say Sarah will admit she slept with Xander, so Rex will be floored. Of course, he won’t judge her like Eric did. Rex obviously has no room to talk! He doesn’t have the same level of animosity toward Xander anyway.

Sarah may also confess that she only did it because she was in so much pain. She has feelings for Eric, but part of her heart still belongs to Rex. Since Sarah screwed up by hooking up with Xander, she’ll be more forgiving of Rex’s mistakes. After Rex grovels again, Sarah will decide to give him another chance.

Days of Our Lives spoilers say Eric will be torn when he hears the news. He’ll still be angry with Sarah, but he’ll also hate that she’s reconciled with his brother. Once Rex and Sarah are an item again, Eric’s feelings for Sarah will grow stronger and stronger.

Will Sarah and Eric end up cheating on Rex? It would serve him right if Days takes that route. However, they could also just have Eric profess his love and let Sarah make a decision. Eric is clearly the better man of the two, so we’d hope she would pick Eric over Rex.

Xander could be the wildcard in all of this. He’s rather smitten with Sarah, so he may stir the pot and hope he can score Sarah for himself! Which man do you want to see Sarah wind up with? We’ll give you updates as other Days details emerge. Stay tuned to DOOL and don’t forget to check CDL often for the latest Days of Our Lives spoilers, updates and news.