Days of Our Lives Spoilers: Sarah’s Betrayal Infuriates Eric – Xander Gloats Over Taking Her to Bed 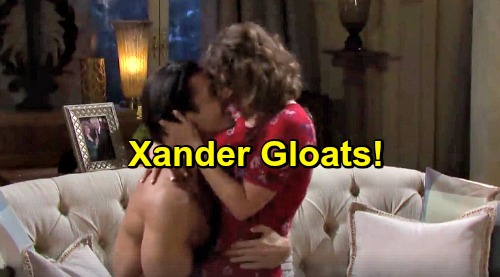 Days of Our Lives (DOOL) spoilers tease that Sarah Horton (Linsey Godfrey) will cross the line. It looks like Eric Brady (Greg Vaughan) will reject drunk Sarah’s hookup idea. After Rex Brady (Kyle Lowder) admits he slept with Sarah’s sister, Noelle Curtis, it’ll prompt a mission for vengeance. Sleeping with Rex’s brother would be a great way to make that happen, but Eric probably won’t be on board.

However, Xander Cook (Paul Telfer) will be happy to take Eric’s place. Days of Our Lives spoilers suggest they’ll have sex in the heat of the moment, but regrets will quickly follow – at least for Sarah. She’ll want to keep this horrible mistake quiet, but it’s doubtful Xander can resist gloating. He already got his hooks into Nicole Walker (Arianne Zucker) and now he’ll have a new reason to brag.

When Eric finds out Sarah and Xander slept together, he’ll be both devastated and enraged. Eric just won’t understand how Sarah could do something like that. There are probably some Days fans who are thinking to themselves that Sarah is single and can do whatever she wants. That’s certainly true, but Eric is entitled to his outburst. Xander is just about the worst person Sarah could’ve picked!

For starters, Xander nearly killed Eric and Nicole by locking them up next to a furnace. Eric barely made it out of that nightmare alive. Xander has also tormented several of Eric’s family members, including Marlena Evans (Deidre Hall) at her own wedding. Eric’s mom was shot and nearly killed.

If John Black (Drake Hogestyn) hadn’t gotten sneaky with that Hattie Adams (Deidre Hall) scheme, Marlena would indeed be dead right now. Another infuriating blow came when Eric found out Xander forced Nicole into marriage and was basically holding her hostage with Holly Jonas (Harlow and Scarlett Mallory). Nicole was presumed dead in an explosion later and that was partially Xander’s fault.

Sarah has become good friends with Eric recently, so Xander isn’t someone she should be hopping in bed with if she wants to maintain that friendship. She wouldn’t like it if Eric hooked up with her worst enemy either. Days of Our Lives spoilers say Eric will blow his top over Sarah’s betrayal. He’ll rip into her with everything he’s got, so she’s sure to be sorry.

DOOL viewers can expect Sarah to start another mission soon after. She’ll trade revenge on Rex for a plan to make peace with Eric. She’ll want to fix things between them, so she’ll express deep remorse and hope that Eric can forgive her. Eric knows all about forgiveness since he’s made plenty of mistakes, too. After all, he’s the reason Sarah’s brother, Daniel Jonas (Shawn Christian), lost his life.

Eric may struggle at first, but it probably won’t be long until these two get their friendship back on track. In fact, this could actually bring them even closer. Days spoilers hint that a love story will develop just in time for Nicole’s return to Salem!

Are you excited to see what the future holds for Eric, Nicole and Sarah? We’ll give you updates as other Days news comes in. Stay tuned to DOOL and don’t forget to check CDL often for the latest Days of Our Lives spoilers, updates and news.