Days of Our Lives Spoilers: Sneaky Jack Plots a Shocking Scandal – Sets Abe and Sheila Up for a Huge Fall 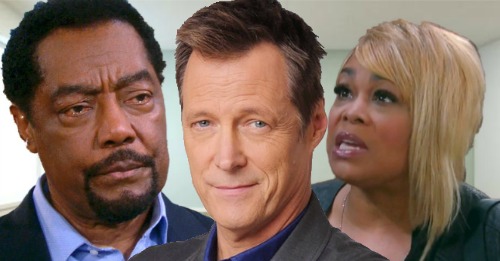 Days of Our Lives (DOOL) spoilers tease that Jack Deveraux (Matthew Ashford) will find a new angle to work. He’s hoping to become Salem’s next mayor, but he’s used some dirty tactics to get this far. Jack started by betraying his own son, JJ Deveraux (Casey Moss), when he outed Haley Chen (Thia Megia) as an undocumented immigrant. That was a low blow, but Jack was just getting started.

Jack and Eve Donovan (Kassie DePaiva) have been determined to prove Haley’s marriage to Tripp Dalton (Lucas Adams) is a sham. When their last plan didn’t work, Eve shifted gears and announced their own marriage to save the rally. Jack went along with it because that’s what he always does when it comes to Eve!

However, Eve’s manipulative strategies will start to rub off on Jack. It sounds like he’ll get an idea of his own during the week of April 22-26. Days of Our Lives spoilers say Jack will walk in on a tense moment. He’ll feel like he’s interrupted something significant between Abe Carver (James Reynolds) and Sheila Watkins (Tionne “T-Boz” Watkins), so that’ll certainly get his attention.

Jack will likely be keeping a close eye on these two from now on. He may sense an opportunity to expose a scandal. Of course, Days fans know there isn’t one to be found just yet. Abe nearly shared a kiss with Sheila at the pub, but he awkwardly blamed her for it. This seems like a solid setup for a real lip lock soon enough.

Jack might talk to Eve and form a plan to catch Abe making out with his employee – perhaps on film. That wouldn’t be a good look as the election rapidly approaches, especially since Sheila’s already caused problems. DOOL viewers will recall that Sheila let herself be duped by the charming Xander Cook (Paul Telfer). She’s the reason the evidence disappeared and Xander got off scot-free.

Once Jack picks up on the chemistry between Mayor Carver and Sheila the convicted felon, he might believe he’s got his ticket to the top! Will Jack use this to derail Abe’s reelection campaign? Will he really blow Abe’s chances or will this backfire on Jack?