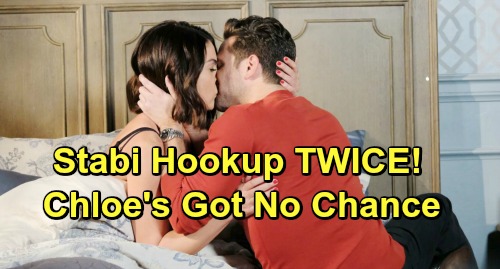 Days of Our Lives (DOOL) spoilers tease that the drug cartel drama will bring a surprising outcome. After all the chaos winds down, Gabi Hernandez (Camila Banus) will have a deep discussion with Stefan DiMera (Brandon Barash). She’s already planted the idea of a little hate sex in his mind, so that’ll lay the groundwork for what comes next.

However, it seems this will be more about lust than loathing. Gabi and Stefan may have hated each other in the past, but they’re not really in that place now – not deep down. Of course, they’d never admit that, but it’s easy to see they’re slowly warming up to each other. Now they’re about to steam up the bedroom as well.

Days of Our Lives spoilers say Gabi and Stefan just won’t be able to resist temptation. They’ll start tearing each other’s clothes off as their passion takes control. They’ll be like wild animals as they rush to hit the sheets.

After the deed is done, Stefan and Gabi will awkwardly talk about their latest move. It won’t be something they’re proud of, but they’ll have to accept that it happened…and will happen again! Days spoilers state that Gabi and Stefan will make love once more the next morning, so they’ll obviously be pleased with the chemistry they’ve developed.

At that point, Stefan will decide he’s got Gabi out of his system and needs to be done with her. During the week of April 22-26, Chloe Lane (Nadia Bjorlin) will be ready to give dating a shot. With the drug cartel out of the way, there’ll be nothing holding Chloe and Stefan back.

This is what Stefan wanted until Gabi came along and turned his world upside down. He’ll struggle with some complex feelings thanks to his enemy turned lover. Part of Stefan will still long for Chloe’s stability and the family they could build with Holly Jonas (Harlow and Scarlett Mallory). Another part of Stefan will like the danger and intrigue Gabi provides.

Like Gabi pointed out, she’s the real deal version of the alter Stefan was so obsessed with. Stefan just couldn’t stay away from Abigail DiMera’s (Kate Mansi) alternate personality, “Gabby.” Despite his lingering feelings for Chloe, Stefan won’t be able to steer clear of the actual Gabi either.

As for Gabi herself, she won’t be immune to Stefan’s charm. DOOL fans know Gabi’s supposed to be plotting against Stefan. She’s indeed scheming, but she’s also falling for him. Days of Our Lives spoilers hint that’ll make things incredibly complicated as time goes on.

It sounds like the excitement will rev up in Salem. We’ll give you updates as other Days news comes in. Stay tuned to DOOL and don’t forget to check CDL often for the latest Days of Our Lives spoilers, updates and news.