Days of Our Lives Spoilers: Stefan and Gabi Share One Last Romantic Night Together – Deadly Tragedy Rips Them Apart 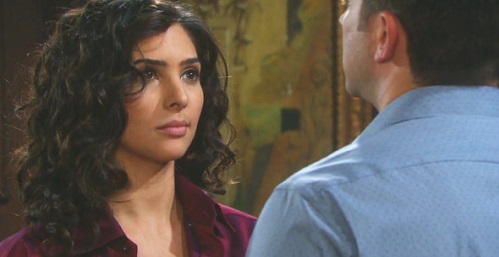 Days of Our Lives (DOOL) spoilers tease that doomsday is coming for Stefan DiMera (Brandon Barash). It looks like we’ll see some conflict thanks to Vivian Alamain (Robin Strasser) and her efforts to push Stefan toward Eve Donovan (Kassie DePaiva). Gabi DiMera (Camila Banus) obviously won’t be thrilled about that, so she’ll lash out at Vivian and probably Stefan, too.

However, Stefan will assure Gabi that she’s his one and only. He’ll once again make it clear that he’s never had love like this before. Gabi’s quite special to him, and she’s over the moon as well. Stefan and Gabi’s relationship has always been complicated, but that makes it richer and more powerful in many ways. Even in the moments they hated each other, there’s been consistent passion under the surface.

Days of Our Lives spoilers say that passion will be on full display during the week of September 30-October 4. DOOL fans can expect a very romantic evening for “Stabi.” Stefan will pamper Gabi and make her feel like the queen of his heart. Gabi will dote on Stefan in return, and they’ll likely make love one last time.

We say one last time because Stefan’s run is nearing the end – at least for now. It looks like Barash is already back filming based on some set clues. Barash himself heavily implied it in a recent live chat on Instagram. There’s no word on whether Barash will play a new character or reprise the role of Stefan, but we still need to cover the heartbreak that’s coming up for Gabi.

Days spoilers state that things will take an awful turn following this romantic night. Lani Price (Sal Stowers) will be rattled after an on-duty incident in the dark. Will Lani accidentally shoot Stefan? It sure seems like it. That should set Stefan up to be Julie Williams’ (Susan Seaforth Hayes) heart donor, so Kate Roberts’ (Lauren Koslow) heart won’t be donated in the end. She’ll survive with a little help from Dr. Wilhelm Rolf (William Utay).

As for Gabi, it appears she’ll go through the terrible pain of Stefan’s death. On the bright side, Days of Our Lives seems to be bringing Barash back as Stefan or someone new. That’s the silver lining in all of this! We’ll give you updates as other Days news comes in. Stay tuned to DOOL and don’t forget to check CDL often for the latest Days of Our Lives spoilers, updates and news.