Days of Our Lives Spoilers: Stefan Blamed for Kidnapping, Kristen Gets Revenge – Kate and Ted Point the Finger at Wrong DiMera 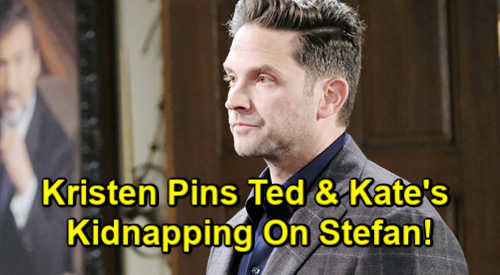 Days of Our Lives (DOOL) spoilers tease that Kristen DiMera (Stacy Haiduk) will seek revenge. Kristen has a way of turning problems into vicious opportunities. That’ll certainly be the case with this hostage situation in the DiMera tunnels.

Kristen’s got a mess on her hands, thanks to Ted Laurent (Gilles Marini) and Kate Roberts (Lauren Koslow), but she’ll manage to use that mess to her advantage.

Kate and Ted will naturally plead for mercy in the secret room. Kristen will indeed spare their lives after she reveals herself, but she’ll require a promise first. Days spoilers say Kristen will make Ted and Kate swear to follow orders. They’ll have to do exactly as they’re told or risk imminent death. Just because Kristen lets them go doesn’t mean they’re in the clear forever.

Ted and Kate will understand that Kristen means business, so they’ll vow to keep quiet about her involvement. Instead, Kristen will want them to put the blame on Stefan DiMera (Brandon Barash). She wasn’t happy about Stefan’s decision to fire “Nicole Walker” (Arianne Zucker), so this will be Kristen’s plan for vengeance.

As a bonus, Kristen will have an easy and believable suspect to pin this on. She may struggle to give Stefan a good motive, but at least he’s done shady things before. Stefan held Gabi Hernandez (Camila Banus) hostage at one point. He was also in love with Abigail DiMera’s (Kate Mansi) alter and made some dark, desperate moves as a result. It won’t be a stretch for Kate and Ted to sell this story.

Even so, Days of Our Lives spoilers say there’ll be some suspicions around the station. Eli Grant (Lamon Archey) and Lani Price (Sal Stowers) will have plenty of tricky questions over the next couple weeks. DOOL viewers can expect Gabi to become an issue – particularly for Kate.

Stefan DiMera Will Insist He Is Innocent Of Kidnapping Charges

Stefan will be bewildered when Kate and Ted point the finger at him. He’ll insist he’s innocent, but it sounds like Stefan may be arrested anyway.

Days of Our Lives spoilers say Gabi will suspect “Nicole” is behind the drama somehow, so she’ll do some digging. Kate will end up on the hot seat as Gabi works to prove Stefan’s innocence, which should lead to some tense moments in the coming episodes.

DOOL fans won’t want to miss the hot shockers ahead. We’ll give you updates as other Days news emerges. Stay tuned to the NBC soap and don’t forget to check CDL often for the latest Days of Our Lives spoilers, updates and news.

In the latest #DAYS, Kristen confronts Xander about his betrayal.https://t.co/ZsCmioRrzb pic.twitter.com/VRg5WCg4K8