BY hellodrdavis on June 15, 2019 | Comments: one comment
Related : Days of Our Lives, Soap Opera, Spoiler, Television 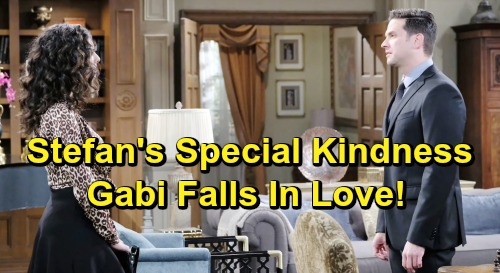 Days of Our Lives (DOOL) spoilers tease that Gabi Hernandez (Camila Banus) will be feeling upset. She’s been close with Will Horton (Chandler Massey) and Sonny Kiriakis (Freddie Smith) for years, as they share a daughter together, but now they’re facing tragedy. As DOOL viewers know, Will has been diagnosed with a brain tumor that is growing rapidly and threatening his life.

Fortunately, Days of Our Lives spoilers indicate that Will is going to pull through in the end, but that will come after some very scary moments. Will’s family and friends will be hopeful as Sarah Horton (Linsey Godfrey) and Rex Brady (Kyle Lowder) work on creating an antidote for Will, but they’ll still brace themselves for the worst.

According to DOOL spoilers, Gabi will be beside herself with worry over Will’s condition. She cares deeply about Will, and she doesn’t want her daughter to grow up without one of his dads. But of course, given Gabi’s recent history, she doesn’t have many close friends in Salem. She won’t really have anywhere to turn for comfort, and she’ll find herself alone and terribly worried about Will’s fate.

But it looks like Gabi will get some support from an unlikely source. She’s been playing Stefan DiMera (Brandon Barash) for weeks now. She set out to seduce Stefan, with ultimate goal of getting him to marry her so that she can then take him for everything he’s worth. She’s well on her way to achieving that goal, and the two of them have hit the sheets several times as part of her grand plan.

So, it seems that Gabi will be surprised when Stefan comes along and notices that she’s distraught. Stefan’s first instinct will probably be to walk away from Gabi and leave her with her sadness, since the two of them allegedly detest each other, but he’ll sense that she needs someone to talk to, and he’ll offer her comfort.

According to DOOL spoilers, Gabi will open up to Stefan and admit how scared she is for Will and Sonny, and for her daughter. Of course, that will probably tug at Stefan’s heartstrings, since he’s very sensitive to family situations. Stefan longs for a family of his own, and he’ll probably really feel for Gabi, given what she’s going through.

It will be interesting to see how Stefan’s decision to comfort Gabi will affect their relationship going forward. So far, Gabi has been pretty cold and calculated when it comes to dealing with Stefan, but she’ll probably soften a bit after he offers her comfort in her time of need.

It probably won’t be long until Gabi and Stefan start having feelings for each other and this “sex only” relationship develops into something much more. Are you looking forward to seeing Stefan and Gabi fall in love for real? Stay tuned to DOOL and don’t forget to check CDL often for the latest Days of Our Lives spoilers, updates, and news.