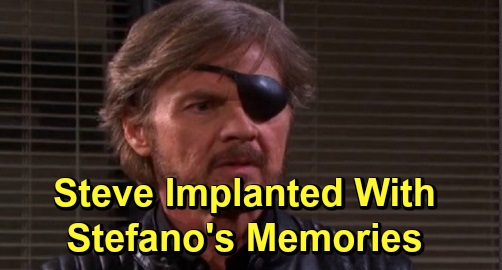 Days of Our Lives (DOOL) spoilers reveal that fans have been buzzing about Stefano DiMera (last played by the late Joseph Mascolo) and his potential return to the show. Obviously, Mascolo has passed on and can’t reprise his role. When it comes to Stefano, Mascolo is irreplaceable in many viewers’ minds.

That’s why we’re betting Days didn’t dare to try. It would honestly be pretty disrespectful to recast Stefano. Why step on Mascolo’s impressive soap legacy like that? Instead, a wild twist may be coming up in this Stefano storyline. Let’s look at a few clues and insider hints to see where things might be headed.

For starters, we’ve got the biggest clue of all: Stefano’s portrait. If Days were getting ready to deliver a brand-new face for the real Stefano, why would they be focusing on Mascolo’s version so much? Princess Gina (Kristian Alfonso) stole the portrait from the mansion and has been gazing at it consistently. It’s a major part of this plot, and it’s a dead giveaway that we’re not truly getting a new Stefano.

However, there has to be a reason Stefano is now involved in a story again. Princess Gina spoke to “Steffie” recently, but we only saw Stefano’s hand. Over the new few weeks, Days of Our Lives spoilers say we’ll continue to see Stefano in this manner.

Chad DiMera (Billy Flynn) will communicate with Stefano through online messages, but he’ll ultimately ask to see his father face to face. Abigail DiMera (Kate Mansi) will push Chad on this since she’ll be chasing a story for The Spectator. She’ll know that Stefano’s triumphant return would be massive news.

The episode that was originally set to air on November 18 confirms all that. It was accidentally aired early in Australia, and it contains other potential Stefano hints. Days of Our Lives spoilers say Stefano will agree to meet with Chad on one condition, but it’s not yet known what that condition might be.

Meanwhile, Kayla Johnson (Mary Beth Evans) will talk to Justin Kiriakis (Wally Kurth) about her divorce. She’ll mention how Steve Johnson (Stephen Nichols) just signed the papers like they were nothing. Wait, that doesn’t sound like Steve! Would he really just be so “meh” about the end of his marriage to “Sweetness”? They’ve faced some issues, but Steve is always going to love Kayla deep down.

Now let’s consider some other crucial hints. Back when Steve’s upcoming return was revealed, DOOL buzz suggested “Stayla” fans would detest the story ahead. There was talk about this particular storyline being pretty crazy as well.

Although it isn’t confirmed, we’ve heard buzz about what that story might involve. Could Stefano actually be Steve with Stefano’s memories implanted? Consider that leaked November 18 episode, which indicates Stefano has decided to reveal himself. That’s set to happen shortly before Steve’s return to the canvas at Thanksgiving.

We’ve also heard rumblings about Steve being paired with Kate Roberts (Lauren Koslow), so that makes sense, too. If Steve had Stefano’s memories implanted, it’s easy to imagine him drifting toward his former love. It also explains why Steve has no interest in Kayla now. Stefano – or “Steveano” you might say – wouldn’t care about Kayla and her feelings.

Finally, Chad makes a bold declaration in Days of Our Lives’ winter promo. He tells Abigail that he’s “absolutely sure” this is his father. Anytime a character is absolutely sure of something…well, it usually means he or she’s wrong!

Again, there’s no confirmation on this “Steve is (sort of) Stefano” theory, but the puzzle pieces are starting to fit together. We’ll give you updates as other Days details emerge. Stay tuned to DOOL and don’t forget to check CDL often for the latest Days of Our Lives spoilers, updates and news.