BY hellodrdavis on July 16, 2019 | Comments: one comment
Related : Days of Our Lives, Soap Opera, Spoiler, Television 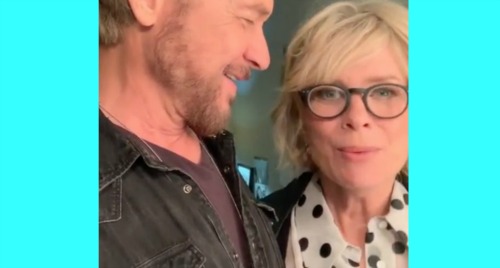 Days of Our Lives (DOOL) spoilers has some great news to pass on about a returning fan-favorite actor and his equally fan-favorite co-star. Stephen Nichols, who portrays Steve “Patch” Johnson on the NBC soap, recently shared a fun update on Instagram with his fans about his pending return to the show.

As DOOL viewers will remember, Steve was suddenly hauled off by the ISA last October for espionage. This was part of the incredible “bionic eye” storyline, where Kayla Johnson (Mary Beth Evans) negotiated with Stefan DiMera (then portrayed by Tyler Christopher) to get Steve the eye technology.

Everything seemed great until it turned out that the bionic eye was recording everything it saw, and that meant that the eye had recorded some of the top-secret ISA files that Steve had encountered. That got Steve busted for treason and in a load of trouble.

And then, after the treason charges had apparently been dropped, Steve stayed away from Salem and went on a top-secret mission that has been keeping him away from Salem ever since. He’s spoken with his beloved Kayla on several occasions, but has never made it home.

Of course, Steve being absent from Salem was necessitated due to contract negotiations between Stephen Nichols and TPTB reaching a standstill. As often happens between actors and shows, the parties couldn’t come to favorable terms and that led Stephen off the show.

But the good news for fans is that Stephen has returned to filming, and in a few months we’ll see him back on our screens, right where he belongs with his beloved “sweetness” Kayla. He’ll get to have a reunion with his long-lost brother Jack Deveraux (Matthew Ashford) as well, which should be interesting.

Stephen recently shared a video with his followers on Instagram of himself and Mary Beth Evans talking and joking around behind the scenes at Days of Our Lives. They appear to have just finished a long day of taping and are as happy as can be. Stephen captioned the video: “Me and M B #days #patchandkaylaforever #summerbreak is over!”

Stephen and Mary Beth’s fans were thrilled to see the video and Stephen’s update. One of Stephen’s followers said: “Welcome back!! Looking forward to seeing you and Mary Beth together on #Days #PatchIsBack #PatchAndKaylaForever.” And another responded: “It brings me joy to see you both together on set & so happy.”

We echo that sentiment, and we can’t wait to see Patch reunited with his sweetness later this year! Are you looking forward to his return? Stay tuned to DOOL and don’t forget to check CDL often for the latest Days of Our Lives spoilers, updates, and news.