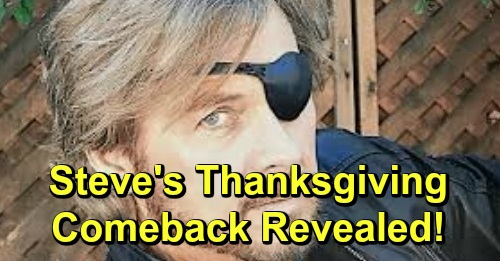 Days of Our Lives (DOOL) spoilers tease that Steve Johnson (Stephen Nichols) will head back to Salem just in time for an important celebration. He’ll return home on November 27, so he’ll be around to provide some Thanksgiving surprises. Word has it that’s when some new twists will be revealed following the time jump. We’ll get some initial shockers right after the one-year leap, but there’ll be more to come as the holidays approach. DOOL flashbacks will be crucial along the way!

Of course, Steve will have to face Kayla Johnson (Mary Beth Evans), who’ll be Kayla Brady again by then. Their divorce should be final, but this may be their first chance at closure. It seems likely things will be weird and tense between them. Most Days of Our Lives buzz points to Kayla and Justin Kiriakis (Wally Kurth) being a couple after the time jump, so that’ll be an adjustment for everyone.

Despite the “Stayla” destruction and Kayla’s controversial new pairing, many Days fans are eager to see Steve’s return. On Twitter, plenty of viewers have been looking forward to Steve’s long-awaited first airdate back. One Steve supported tweeted, “Yay!!!! Can’t wait to see him!!” “We cannot wait to see this amazing hero back in Salem, counting down the days till we see Steve Patch Johnson return,” said another.

Other Days of Our Lives watchers are already anxiously awaiting a “Stayla” reunion. It has to happen sooner or later! One fan confidently predicted, “Kayla & Steve will be reunited: a given and reward will be sweet, the sweetest. Great things come to those who wait.” “Steve and Kayla are endgame. That’s all,” said one more viewer.

However, there’ll be major drama in the meantime. Steve, Kayla, Justin and some other key players are going to be involved in some huge stories. Steve’s Thanksgiving comeback shocker is just the beginning. Days of Our Lives spoilers say Christmas and New Year’s Eve will definitely bring some bombshells as well, so you won’t want to miss all the action this holiday season.

Are you glad Steve will return on November 27? Have you missed having “Patch” in Salem? We’ll give you updates as other Days news comes in. Stay tuned to DOOL and don’t forget to check CDL often for the latest Days of Our Lives spoilers, updates and news.