BY Heather Hughes on May 28, 2019 | Comments: 3 comments
Related : Days of Our Lives, Soap Opera, Spoiler, Television 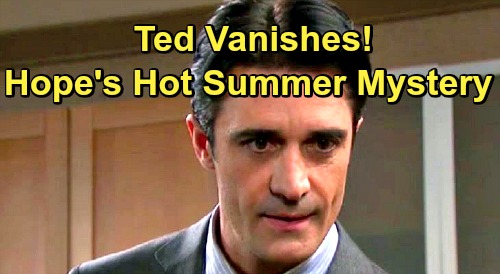 Days of Our Lives (DOOL) spoilers tease that Hope Hernandez (Kristian Alfonso) will enjoy her new romantic adventure. Her marriage to Rafe Hernandez (Galen Gering) got off to a rocky start thanks to the secret he was keeping. Rafe slept with his ex, Sami Brady (Alison Sweeney), and that tore apart his relationship for quite some time.

Hope and Rafe managed to repair some of the damage, but other obstacles emerged eventually. Rafe always seemed to be rescuing a former flame – whether it was rushing off to help Sami in Italy or dealing with crazy Jordan Ridgeway (Chrishell Hartley) and all her drama. He even agreed to raise Jordan’s baby without considering Hope’s feelings at all.

It’s no wonder Hope turned her attention to Ted Laurent (Gilles Marini)! Now that Hope is divorcing Rafe, she’s free to do whatever she wants. Days of Our Lives spoilers say Hope will take this opportunity to let loose and finally breathe. She won’t be in any hurry to get serious with Ted or pressure herself in any way. Hope will just want to enjoy herself since she hasn’t done that in forever.

Days of Our Lives spoilers state that things will go well at first, but trouble’s right around the corner. Just as Hope and Ted’s romance starts to heat up, a shocking twist will change the game. Hope will be puzzled when she can’t get in touch with Ted. She’ll inevitably begin asking around, but no one else will have seen Ted either.

As days go by, Hope will realize Ted has vanished without a trace. She’ll have no idea how to reach him or where he might’ve gone. Why would Ted bail when he finally got his dream girl? He wouldn’t, so Hope may suspect there was foul play involved.

A hot summer mystery should kick off, and it might tie in with a couple different DOOL storylines. For starters, Diana Cooper (Judith Chapman) mentioned that she spotted Ted’s supposedly dead wife in France a while back. Will Hope do some digging and end up tracking her down?

This could also collide with answers about Holly Jonas (Harlow and Scarlett Mallory). By looking into Ted’s activities, Hope could make some stunning discoveries – like the fact that Holly isn’t dead. Just because Hope doesn’t have a badge doesn’t mean she can’t do some top-notch detective work!

Some exciting developments are ahead in Salem. We’ll give you updates as other Days news comes in. Stay tuned to DOOL and don’t forget to check CDL often for the latest Days of Our Lives spoilers, updates and news.