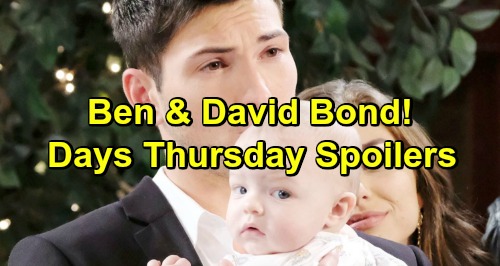 Days of Our Lives (DOOL) spoilers for Thursday, April 11, tease that Claire Brady (Olivia Rose Keegan) will drop a bomb on Eve Donovan (Kassie DePaiva). She’ll be a mess over Tripp Dalton’s (Lucas Adams) impending marriage to Haley Chen (Thia Megia) as well as the dark secret she’s keeping. Eve will finally manage to pry the truth out of Claire. She’ll get an admission that’ll leave her truly shocked.

DOOL fans know Claire’s responsible for Ciara Brady’s (Victoria Konefal) attempted murder. She wanted Ciara out of the picture so she could lock in Tripp for herself, so she decided to burn the cabin down. Claire changed her mind and came rushing back later, but Ciara had already been saved. Of course, that doesn’t change the fact that Claire almost killed her own aunt!

Days of Our Lives spoilers say Claire will confess to setting the cabin fire. She’ll tearfully admit it to Eve, who’ll form a plan to cover Claire’s tracks. Eve obviously still hates Ben Weston’s (Robert Scott Wilson) guts, so she’ll think they should just pin this on him. Claire will do anything to avoid going down for this, which means she’ll get on board and hope for the best.

Other Days spoilers state that Rafe Hernandez (Galen Gering) and Hope Hernandez (Kristian Alfonso) will have a massive blowup. Rafe’s decision to keep Jordan Ridgeway’s (Chrishell Hartley) baby will certainly be a source of contention. Hope won’t get why Rafe thinks he can just make this choice for the both of them. They’re married and live together, so it’s crazy for him to not consult her on this.

Since Rafe will stand his ground, Hope won’t be sure she can stay married to him. Days of Our Lives spoilers say Rafe will announce his decision to move out, so things aren’t looking good for this couple at the moment. Over with Ben, he’ll get a chance to bond with his nephew, David. Lani Price (Sal Stowers) won’t allow it for long, but at least Ben will get to meet the little fella.

Elsewhere, Haley will assure JJ Deveraux (Casey Moss) that she forgives him for blabbing to his dad. Jack Deveraux caused a nightmare for Haley along with ruthless Eve, but JJ never meant for any of this to happen. Days of Our Lives spoilers say Haley will promise she understands that. She’ll connect with JJ during a tender chat, so stay tuned for some warm scenes.

Jennifer Horton (Melissa Reeves) will also freak over Jack’s bump on the head. He just fell in the storage room she trapped him in, so Jenn will be in panic mode! We’ll give you updates as other Days news comes in. Stick with DOOL and don’t forget to check CDL often for the latest Days of Our Lives spoilers, updates and news.