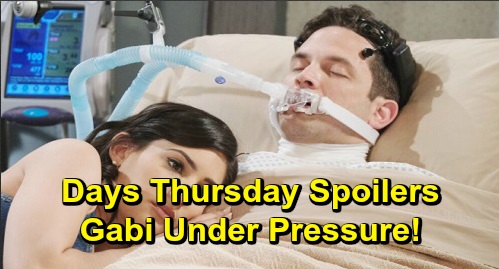 Days of Our Lives (DOOL) spoilers for Thursday, October 10, tease that Dr. Wilhelm Rolf (William Utay) will be pleased with himself. He just injected Hope Brady (Kristian Alfonso) with a loaded syringe, so step one of his sneaky plan is complete. DOOL fans can expect Dr. Rolf to focus on step two in Thursday’s episode. His plot will remain rather mysterious at this point, but it won’t be long until we see some results on Hope’s end. She won’t be able to escape what Dr. Rolf has in store for her.

At the chapel, Eli Grant (Lamon Archey) will be surprised when he finds drugged Hope snoozing away. He’ll wake Hope up and notice she seems pretty out of it, but he’ll probably just assume all the Julie Williams (Susan Seaforth Hayes) stress is taking a toll. Eli may even admit he hasn’t been sleeping well either.

Days of Our Lives spoilers say Hope’s unusual resting spot won’t be a huge red flag, but her erratic behavior will become one down the road. It looks like Hope will ultimately believe she’s Princess Gina, so Dr. Rolf must have some intriguing motives.

In the meantime, Victor Kiriakis (John Aniston) will lash out at Brady Black (Eric Martsolf). He was already furious about Kristen DiMera’s (Stacy Haiduk) pregnancy, but the fact that she’s moving in will really rile him up. Victor may forbid it at first since this is his mansion we’re talking about. However, he’ll eventually relent for the sake of the child – or perhaps just to shut Brady up!

Other Days of Our Lives spoilers say Sonny Kiriakis (Freddie Smith) and Will Horton (Chandler Massey) will reach out to Gabi DiMera (Camila Banus). They’ll let Gabi know she’s got their support, but they’ll also want to discuss the matter of Stefan DiMera’s (Brandon Barash) heart. Will and Sonny will push Gabi to give Julie her hubby’s heart like Eli requested, but Gabi will stand her ground for now.

Later, Doug Williams (Bill Hayes) will plead with Gabi followed by Rafe Hernandez (Galen Gering), but Days spoilers say she’ll demand time alone to think. Gabi will need a few minutes to mull over this serious decision. Pulling the plug on Stefan is the last thing Gabi wants to do, but she’ll start leaning in that direction soon enough.