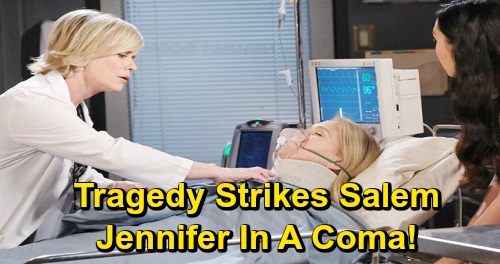 Days of Our Lives spoilers reveal Jennifer Horton (Melissa Reeves) discovers the truth about Hope Brady (Kristian Alfonso). However, during the wedding reception, Hope’s alter ego, Princess Gina shoves the new bride off of a balcony.

Jennifer is marrying her soul mate, Jack Deveraux (Matthew Ashford). Now that he has his memories back, it seems that everything is going well in his life. Jennifer is thrilled too and happily weds the man she loves.

However, don’t expect things to stay that way. Tragedy is lurking just around the corner due to Jennifer’s possession of Dr. Rolf’s (William Utay) flash drive.

Days of Our Lives spoilers tease that Jennifer learns something about the flash drive. In the latest issue of Soap Opera Digest, Matthew Ashford discussed the emotional storyline. He confirmed that Jennifer knows about the mad scientist’s plan, including the transformation of Hope into Princess Gina.

However, Jennifer isn’t the only one that realizes the sinister scientist’s flash drive has been hacked. He also realizes it and after telling Princess Gina about it, the woman goes on a mission to keep Dr. Rolf’s secrets safe.

It is revealed that Jennifer is at her wedding reception. Alone by the balcony, Princess Gina corners her. Not only does she get the flash drive back, but her solution to Jennifer’s knowledge is to get rid of the witness. She pushes her off the balcony and Jennifer’s body plummets to the town square below. It happens right in front of Jack and JJ Deveraux (Casey Moss).

Ashford revealed details about the storyline, including the moment that Jack sees Jennifer’s crumpled up body at his feet.

“… there was something heartbreakingly horrible about this for me. I just felt like there was this moment of hope, that things were looking so positive and good for Jack and Jennifer, and then it came crashing down.”

At the hospital, Jennifer tries to explain what happened to her new husband. However, she is unable to speak and must be rushed to surgery. Unfortunately, she ends up in a coma and Jack is devastated.

Even though people believe that Jennifer fell, Jack and JJ aren’t so sure. Hope is questioned about the incident, but claims to know nothing. The distraught father and son are determined to find out the truth about what led to the fall. When that happens, how will “Hope” aka Princess Gina explain herself out of this one?

Be sure to tune in to catch up on everything happening on DOOL right now. Come back here often for Days of Our Lives spoilers, updates, news, and rumors!