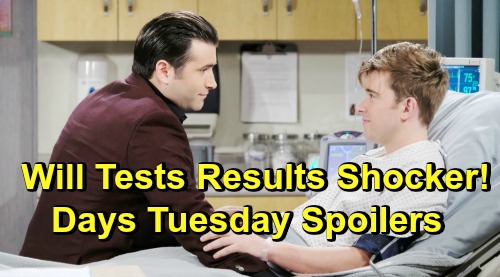 Days of Our Lives (DOOL) spoilers for Tuesday, April 2, tease that Dr. Rex Brady (Kyle Lowder) will try to get to the bottom of Will Horton’s (Chandler Massey) medical condition. Will collapsed at the Kiriakis mansion, but no one knows why just yet. Rex will deliver some results soon enough, but they probably won’t reveal anything useful. It seems this will remain a mystery to both Will and his doctors.

Sonny Kiriakis (Freddie Smith) will certainly worry about Will and his strange symptoms. He’ll be determined to find out what’s really going on, so he’ll team up with Will in Tuesday’s episode. Days of Our Lives spoilers say they’ll put their heads together and try to nail down a diagnosis. Sonny may even consider hiring a specialist, but they may be overlooking a simple explanation.

Back when Will was desperate to retrieve his memories, he used Dr. Wilhelm Rolf’s (William Utay) memory serum. It meant taking a huge risk since nobody could predict the potential side effects. Will seemed OK, but perhaps those side effects are just now coming on. This may be a delayed reaction, so Will and Sonny might put all this together sooner or later.

In the meantime, Dr. Sarah Horton (Linsey Godfrey) will spread her engagement news. She recently agreed to marry Rex, so she’ll tell Maggie Kiriakis (Suzanne Rogers) and Victor Kiriakis (John Aniston) on Tuesday. Days spoilers say Maggie will wonder if Sarah’s sure about this. She won’t want Sarah rushing into things with Rex again if she’s not ready, but it looks like Sarah will stand her ground.

Of course, DOOL fans know Sarah and Eric Brady (Greg Vaughan) are stuck pining for each other. Eric will consider confessing his feelings for Sarah at some point this week, but what about that promise to God? His vow may continue to hinder his future with Sarah, but they should figure this out eventually.

Until then, Days of Our Lives spoilers say Eric will have an answer for Brady Black (Eric Martsolf). Brady gave Eric a harsh ultimatum, but Sarah’s admission to Rex eliminated Brady’s leverage. There’s no reason Eric has to help Brady now, so he might turn him down. Eric may choose not to intervene with Chloe Lane’s (Nadia Bjorlin) choices regarding her children.

Finally, Kate Roberts (Lauren Koslow) will reach out to Victor and make her pitch. She’ll think she could be a real asset if she returns to Titan, but it’ll be up to Victor. Kate can be awfully convincing, so there’s a good chance she’ll talk Victor into it. She’s not the most trustworthy person in the world, but she’s a solid businesswoman.

It sounds like some great scenes are on the way. We’ll give you updates as other Days details emerge. Stay tuned to DOOL and don’t forget to check CDL often for the latest Days of Our Lives spoilers, updates and news.