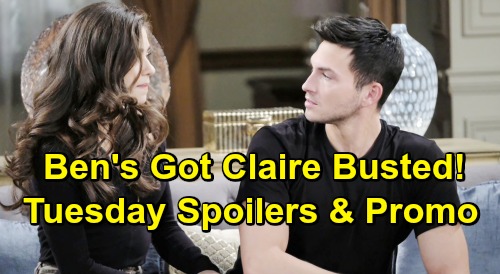 Days of Our Lives (DOOL) spoilers for Tuesday, June 4, tease that Will Horton (Chandler Massey) will share some difficult news with Dr. Marlena Evans (Deidre Hall). He’ll admit his condition is even more serious than he thought. Will recently found out he could die in just a few days, so he’ll try to come to grips with that. His brain tumor is still growing and there’s nothing he can do about it.

Of course, Marlena may not want her grandson to give up. John Black (Drake Hogestyn) is still on the hunt for Dr. Wilhelm Rolf’s (William Utay) diary, so she’ll hope he can find it in time. However, Will’s going to face the facts and accept that death is near. He’ll prepare for the end, but Days of Our Lives spoilers say his luck will turn around eventually.

Marlena will also meet with Claire Brady (Olivia Rose Keegan) in Tuesday’s new DOOL episode, June 4. Claire is struggling to deal with her issues, so she’ll open up to Marlena and try to get some guidance. Days spoilers say Claire’s guilt will nearly drive her to make a fire confession. She’ll be on the verge of coming clean, but Tripp Dalton’s (Lucas Adams) phone call will halt that plan.

Tripp will call Claire up and mention that he’s going to take a little trip. He’ll claim he’s going to visit Steve Johnson (Stephen Nichols), but that’ll just be a cover story. Tripp will actually plan on helping Haley Chen (Thia Megia) and JJ Deveraux (Casey Moss). However, Claire won’t know what’s really going on, so Tripp’s call will leave her hopeful. The fact that Tripp’s reaching out will mean a lot.

As a result, Claire will stay tight-lipped and panic a little later. She’ll overhear Ben Weston (Robert Scott Wilson) talking to Ciara Brady (Victoria Konefal) and realize she could be in big trouble. Ben’s growing more and more suspicious about Claire being the fire-setter. That’s why Claire will call Eve Deveraux (Kassie DePaiva) and leave an urgent voicemail. She’ll count on Eve to help her out ASAP.

Unfortunately, Eve will call back while Ben’s still within earshot. He’ll hear Claire’s ringtone, which happens to be the same one he recalled in his hypnosis session. Days of Our Lives spoilers say Ben will realize Claire indeed set the fire, so he’ll have to figure out his next move.

Finally, Jack Deveraux (Matthew Ashford) will suggest a deal to JJ, which probably involves turning in Haley and not facing any consequences himself. JJ wouldn’t go for an idea like that, so it sounds like this father and son will remain at odds. We’ll give you updates as other Days details emerge. Stay tuned to DOOL and don’t forget to check CDL often for the latest Days of Our Lives spoilers, updates and news.