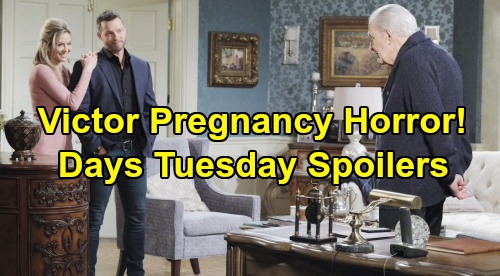 Days of Our Lives (DOOL) spoilers for Tuesday, October 8, tease that Gabi DiMera (Camila Banus) will turn to Dr. Wilhelm Rolf (William Utay) for help. In fact, she’ll demand it! Dr. Rolf goes around saving every other dead Days character in town, so Gabi will insist he has to save Stefan DiMera (Brandon Barash), too. Unfortunately, there are some things even Dr. Rolf can’t undo, and this is apparently one of them.

Of course, we should point out that EJ DiMera (James Scott) was cold in the morgue when he was injected with Dr. Rolf’s miracle serum. He’s alive and on the road to recovery, but for whatever reason there’ll be no way to bring Stefan back – at least for the time being. There are easy rewrite strategies DOOL could use to fix this eventually, but there’ll be no hope for Stefan right now.

Days of Our Lives spoilers say Gabi will struggle to believe Stefan’s fight is over. She’ll remain in denial about Stefan’s lack of brain activity, but Rafe Hernandez (Galen Gering) will convince his sister that she has to let go. That’ll give Eli Grant (Lamon Archey) the opportunity he needs to seek a huge favor from his ex. Eli will stun Gabi by asking her to donate Stefan’s heart to Julie Williams (Susan Seaforth Hayes), so you can imagine the outrage that’ll bring!

Other Days of Our Lives spoilers say Brady Black (Eric Martsolf) will drop a bomb on Victor Kiriakis (John Aniston). He’ll admit Kristen DiMera (Stacy Haiduk) is pregnant, so Victor will naturally hit the roof. Brady will get into a heated confrontation with his granddad, but he won’t budge on the idea of stepping up as a father. He realizes Kristen is beyond problematic, but that can’t stop him from being there for their son or daughter.

Meanwhile, Kristen will make a new pal. Jordan Ridgeway (Chrishell Hartley) will find common ground with the manipulative DiMera, so an interesting friendship will be formed. Perhaps these allies could be useful to each other as their storylines move forward.

As for Ben Weston (Robert Scott Wilson), he’ll grow increasingly concerned about the threat to Ciara Brady’s (Victoria Konefal) life. Ben will have a terrible nightmare about Jordan murdering Ciara, so it’s clear this is taking a toll on him. He’ll take bold steps to stop Jordan later this week, but some big twists and turns are brewing.

It sounds like another great episode’s coming up. We’ll give you updates as other Days news emerges. Stay tuned to DOOL and don’t forget to check CDL often for the latest Days of Our Lives spoilers, updates and news.