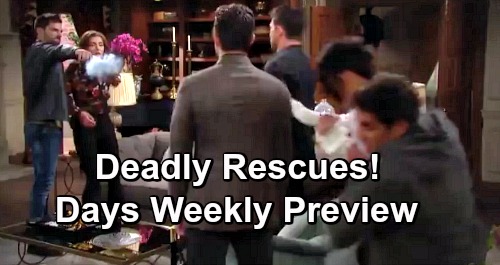 Days of Our Lives (DOOL) spoilers for the week of April 15-19 tease that some shockers and shakeups are brewing. For starters, Will Horton (Chandler Massey) will have a biopsy done on his brain tumor. Unfortunately, he’ll face a frightening ordeal while he’s in he hospital. Dr. Rex Brady (Kyle Lowder) will leap into action and help Will regain consciousness, but there’ll be some scary moments.

Rex will also get a surprising offer this week along with Dr. Sarah Horton (Linsey Godfrey). Days of Our Lives spoilers say Eric Brady (Greg Vaughan) will suggest he could do their wedding photos. It looks like they’ll take Eric up on the offer, but Rex will still have some concerns. He’ll corner Eric alone and wonder if he’s sure he’s not fighting back deep feelings for Sarah.

Eric is indeed wrestling with the love in his heart, but he won’t let Rex know that. At some point, Eric will also battle some old regrets. He’ll have remorse over how a few things went down with Nicole Walker (Arianne Zucker), so he’ll open up to Sarah and get some comfort.

Other Days of Our Lives spoilers say Ben Weston (Robert Scott Wilson) and Ciara Brady’s (Victoria Konefal) steamy night will be derailed. The drug cartel will provide an interruption that brings danger. Ciara will ultimately become a hostage, so Ben will join forces with Hope Hernandez (Kristian Alfonso) to save her.

Meanwhile, Rafe Hernandez (Galen Gering) will get shot trying to protect Gabi Hernandez (Camila Banus), who’ll also be caught up in this nightmare. Days spoilers state that Rafe will save Gabi and even Stefan DiMera (Brandon Barash), but he’ll have to be rushed to the hospital. Once Rafe’s on the mend, Eli Grant (Lamon Archey) will fill him in on Ted Laurent’s (Gilles Marini) shady phone call.

Days of Our Lives spoilers say Chloe Lane (Nadia Bjorlin) will land in peril as well. Brady Black (Eric Martsolf) will step up to rescue her along with Eli, who’ll shoot and kill a cartel member. Next, let’s talk about some DOOL nuptials. It appears Tripp Dalton (Lucas Adams) and Haley Chen (Thia Megia) will make it official as planned, so Claire Brady (Olivia Rose Keegan) will continue to fume.

Over with Jack Deveraux (Matthew Ashford) and Eve Donovan (Kassie DePaiva), they’ll marry and kick off their staycation honeymoon by making love. Across town, Victor Kiriakis (John Aniston) will decide he may have a place for Kate Roberts’ (Lauren Koslow) talents after all. He’ll hint at a position for Kate at Titan, but it sounds like she’ll have to prove herself.

Brady won’t be happy about Kate’s return to Titan, but Victor will do what he wants as usual! DOOL viewers will want to check out all the twists and turns ahead. We’ll give you updates as other Days news comes in. Stick with the NBC soap and don’t forget to check CDL often for the latest Days of Our Lives spoilers, updates and news.