BY hellodrdavis on June 29, 2019 | Comments: one comment
Related : Days of Our Lives, Soap Opera, Spoiler, Television 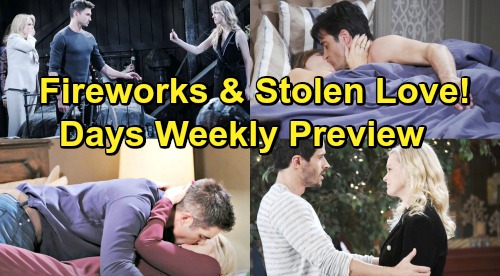 Days of Our Lives (DOOL) spoilers preview tease that things will heat up and fireworks will explode as Salem rings in the 4th of July. The new DOOL promo video for the week of July 1-5 promises lots of romance in the air, as well as some surprises and big confrontations for some key Salemites.

Let’s start with the romance side of things. The DOOL promo shows various couples happily celebrating Independence Day together at the Brady-Horton BBQ, which Sarah Horton (Linsey Godfrey) and Rex Brady (Kyle Lowder) will host. Doug Williams (Bill Hayes) and Julie Williams (Susan Seaforth Hayes) are shown happy and celebrating along with their friends and relatives – it wouldn’t be a true Days celebration without Doug and Julie!

JJ Deveraux (Casey Moss) and Haley Chen (Thia Megia) will attend the BBQ as well, and they’ll happily celebrate together, since Haley was able to at least temporarily stay in the country while fighting for a green card. Haley’s appearance at the event will surely come as a happy surprise to the Horton and Brady clans, who each supported her in her bid to remain in the US.

New lovebirds Stefan DiMera (Brandon Barash) and Gabi Hernandez (Camila Banus) are shown smooching in the previews as well, as they’ve recently taken their relationship from an “enemies with benefits” thing to a more romantic pairing. And in a very happy turn of events, Eli Grant (Lamon Archey) is seen getting down on one knee and proposing to Lani Price (Sal Stowers). Go, Eli!

Even Ted Laurent (Gilles Marini) and Kate DiMera (Lauren Koslow), who are being held captive in the DiMera tunnels by Xander Cook (Paul Telfer) will experience some fireworks. The promo shows a shirtless Ted telling Kate to take her clothes off, followed by a passionate kiss between the two.

There will also be some big confrontations during the week of July 1. First off, we’ll have the situation that’s unfolding with Claire Brady (Olivia Rose Keegan). As DOOL viewers know, Claire lost it after Tripp Dalton (Lucas Adams) and Ciara Brady (Victoria Konefal) tried to set her up and record her confession.

Now Tripp is injured by knife-wielding Claire, and Ciara and Claire will be missing. According to Days of Our Lives spoilers, Claire will hold Ciara hostage while Marlena Evans (Deidre Hall), Ben Weston (Robert Scott Wilson), and John Black (Drake Hogestyn) frantically try to track them down.

That will naturally take them to police commissioner Eve Deveraux (Kassie DePaiva), who will get an earful from Marlena and John. As DOOL viewers know, Eve has known about Claire’s psychological problems and fire setting for some time, but she hasn’t done anything about it.

The DOOL promo shows Marlena and John confronting Eve about her inaction, with Marlena shouting “Do you know what you did to our granddaughter?!” It looks like it will be a bad scene,

but hopefully Marlena and John will get some cooperation from the new commish in tracking down Claire and Ciara and making sure neither get hurt.

Finally, the DOOL promo shows a lead-up to another big confrontation. Rafe Hernandez (Galen Gering) and Carrie Brady (Christie Clark) are shown in bed together. According to DOOL spoilers, the two will skip the 4th of July fireworks and spend the holiday reconnecting and making love. It will be a nice reunion for the two, until someone appears at the bedroom door wanting in.

That person at the door will be Hope Brady (Kristian Alfonso), who will apparently be seeking out Rafe, not realizing that he’s otherwise indisposed. She’ll walk right on in and catch Rafe and Carrie in bed together, but viewers will have to tune in to watch her reaction and the resulting fallout.

It certainly sounds like we’re in for a big week! Stay tuned to DOOL and don’t forget to check CDL often for the latest Days of Our Lives spoilers, updates, and news.