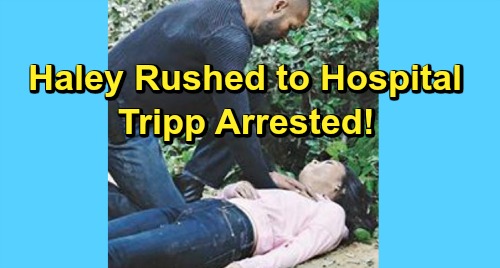 Days of Our Lives (DOOL) spoilers update for the week of June 10 tease that Ben Weston (Robert Scott Wilson) will need some backup. He’ll arrive to find the Horton cabin on fire with Tripp Dalton (Lucas Adams) and Haley Chen (Thia Megia) inside, but he’ll need some help as he carries out his rescue. Thankfully, reinforcements will show up before long.

Eli Grant (Lamon Archey) will make it to the scene of the crime along with some officers from the Salem PD. We’ll see some real teamwork going on as they try to make sure Haley and Tripp get to safety in time. The good news is the victims will be pulled from the flames. The bad news is Tripp and Haley will suffer smoke inhalation.

Haley will get the worst of it, so it looks like Eli will have to perform CPR and get her heart pumping again. Thankfully, Days spoilers say Eli’s efforts will pay off. Haley will still be rushed to the hospital for more treatment, but she’s going to be just fine – physically at least. That doesn’t take care of Haley’s lingering immigration issues.

Even so, JJ Deveraux (Casey Moss) will just be glad to know Haley’s OK. Days of Our Lives spoilers say he’ll race to Haley’s bedside and stay with her as she recovers. JJ won’t know what the future holds, but Haley still has one and that’ll be enough for right now.

Tripp will have to deal with some legal woes as well. DOOL fans know Haley covered for Tripp when she confessed she was an undocumented immigrant. That plan will be out the window once the cops realize Tripp tried to sneak Haley out of the country. It’ll become evident that Tripp married Haley to get her green card.

As a result, Days of Our Lives spoilers state that Tripp will be arrested immediately. Of course, he’ll be most concerned about Haley’s fate – both in terms of her health and her deportation. Haley’s transport to China will be back on, but a sudden solution will emerge when she needs it most.

It sounds like some great episodes are ahead during the week of June 10-14. We’ll give you updates as other Days details come in. Stick with DOOL and don’t forget to check CDL often for the latest Days of Our Lives spoilers, updates and news.