Days of Our Lives Spoilers: Week of May 28 Preview – Kristen Sets Out To Seduce Brady as Nicole – Can Brady Resist?

BY hellodrdavis on May 25, 2019 | Comments: 2 comments
Related : Days of Our Lives, Soap Opera, Spoiler, Television 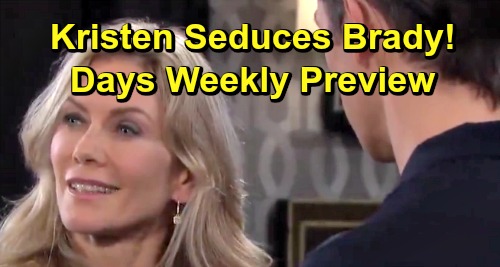 Days of Our Lives (DOOL) spoilers tease that Kristen DiMera (Stacy Haiduk) will really start to unleash the seduction tactics on Brady Black (Eric Martsolf) in the coming week. The new DOOL weekly promo for the week of May 28-31 (there is no new episode of Days on Monday, May 27) indicate that Kristen – who is currently masquerading around Salem as Nicole Walker (Arianne Zucker) – will do whatever she can to get close to Brady.

Of course, DOOL fans will remember that Kristen has wanted Brady for a long time, and Brady used that to his advantage several months ago when he pretended to want Kristen in order to get her to lead him to the Nashville warehouse. He even went so far as to sleep with Kristen in order to further his ruse, which only made her fall harder for him.

But in typical Kristen fashion, she may push the envelope a little too far. She wants nothing more than to seduce Brady as she’s in disguise as Nicole, but perhaps she hasn’t thought her plan through. The DOOL promo shows Kristen lamenting that she hates having to be Nicole in order to get Brady. But it seems that this is the only way she can get Brady at this point, and she knows it.

Her plan is so far-fetched that apparently Xander Cook (Paul Telfer) will be the voice of reason for Kristen. The DOOL promo shows Xander reminding Kristen that if Brady goes to bed with “Nicole” but gets her instead, then Brady will likely notice that. It seems that what Kristen wants the most could be the very thing that gets her caught.

But will Kristen listen to Xander and tone things down with Brady a bit? It certainly doesn’t look like it, since the promo shows Nicole and Brady together with Nicole wearing nothing but a bathrobe. It looks like she’s going to plunge forward with her plan to seduce Brady, but how susceptible to this will Brady be?

After all, Brady has finally found some peace with his brother Eric Brady (Greg Vaughan), who is deeply in love with the real Nicole. Having the Kristen DiMera version of Nicole coming onto him is confusing for Brady, and it’s got him conflicted. Hopefully for everyone’s sake, Brady will be able to continue to restrain himself from “Nicole’s” advances and keep peace with his brother.

Do you think that Brady will be able to resist the temptation and avoid sleeping with Kristen? Stay tuned to DOOL and don’t forget to check CDL often for the latest Days of Our Lives spoilers, updates, and news.