Days of Our Lives Spoilers: Week Of September 23 Preview – Jack Gets His Memories Back After Epic Fight With Dr. Shah – Jack & Jen Reunited 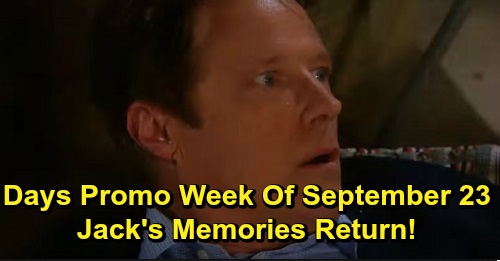 Days of Our Lives (DOOL) spoilers tease that viewers are in for a real treat as Jennifer Horton’s (Melissa Reeves) dreams finally come true and Jack Deveraux (Matthew Ashford) gets his memories back. The new DOOL promo for the week of September 23rd is all about the great love story of Jack and Jen, all they’ve been through in the past nine months since Jack has returned from the dead, and what leads up to Jack getting his memories back. As the promo promises, all of the drama that DOOL fans have endured has all led to one big upcoming moment.

Of course, Jack has been quite preoccupied with another woman ever since he came back to Salem in January of this year…Eve Donovan (Kassie DePaiva), whom Jack ultimately married. But recently Jack learned just how manipulative and devious Eve was when she not only burned Dr. Wilhelm Rolf’s (William Utay) diary but destroyed the memory serum that Jack had created – all in an attempt to keep Jack from regaining his memories and reuniting with Jen.

In addition to taking up with Eve, Jack has done a lot to alienate his family since he returned. He ran for mayor with Eve as his campaign manager, on a platform that seriously disturbed Jen, JJ Deveraux (Casey Moss), and Abigail Deveraux (Kate Mansi). He even had JJ’s girlfriend arrested and nearly deported – something that didn’t exactly endear him to his son. He ran a dirty campaign, during which he slandered Abe Carver (James Reynolds), a close family friend.

Of course, Jack did all of these things because he was completely unaware of who he is, yet finally he became disillusioned with Eve and decided that he wanted his memories back. But he’s had setback after setback when it comes to getting the memory serum created, and it’s been starting to look hopeless that Jack would ever regain his memories.

But according to the new DOOL promo and ongoing spoilers, Jack will indeed regain his memories, and he won’t even need the serum to do so. As DOOL viewers know, Jen is currently being held captive by Dr. Henry Shah (Piter Marick). He had her tied up and gagged at The Salem Inn, but he’s just moved her to another location. The DOOL promo shows Jack in a room alone with Dr. Shah and Jen, and Dr. Shah is holding a knife to Jen’s throat.

From here, it appears that an epic struggle will ensue between Jack and Dr. Shah for the knife, during which Dr. Shah will end up stabbed to death and Jack will hit his head hard. Jen will rush to his side, worried that he’s been seriously hurt, but it seems that the blow to Jack’s head will be all he needs to jog his memories. His memories will return in an instant, and Jack will tell Jen that he remembers everything.

We should note that the DOOL promo, which you can watch below, contains some nice flashbacks to some key moments in Jack and Jen’s history, so we’re hoping that the episode featuring the re-emergence of Jack’s memories also treats viewers to some classic Jack and Jen scenes as well. At any rate, it looks like a nice reunion is right around the corner for these two!