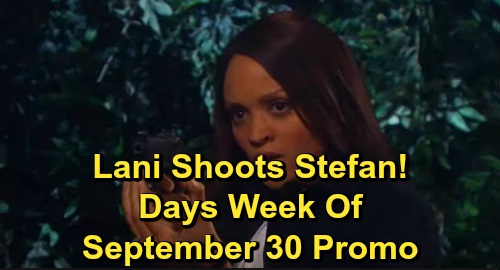 Days of Our Lives (DOOL) spoilers tease that matters of life and death will be at the forefront in Salem over the next week. The new DOOL promo for the week of September 30th promises some serious drama as two pregnancies are revealed, Julie Williams (Susan Seaforth Hayes) starts to slip away, and Stefan DiMera (Brandon Barash) finds himself in the wrong place at the wrong time. It looks like it will be a gripping week, so let’s get right into it!

First off, Nicole Walker (Arianne Zucker) will put two and two together and figure out that Sarah Horton (Linsey Godfrey) is pregnant with Eric Brady’s (Greg Vaughan) baby. Perhaps Sarah will be exhibiting some pregnancy symptoms and/or acting weird, and Nicole will wonder what’s up. According to DOOL spoilers, Nicole will ask Sarah directly whether she’s pregnant, and from the looks of the new promo, it seems that Eric will overhear the exchange.

Of course, Sarah knew that she was going to have to tell Eric about the pregnancy at some point, but she probably wasn’t expecting to have to tell him so soon. Sarah’s been very worried about complicating Eric’s relationship with Nicole and Holly Jonas (Harlow and Scarlett Mallory), and she probably wanted to find the right way to tell Eric and at the right time. But it looks like her secret will be out, so she, Eric, and Nicole will have to deal with the reality of the situation.

Next, there will be another big pregnancy reveal, as Kristen DiMera (Stacy Haiduk) tells Brady Black (Eric Martsolf) that she’s carrying his love child. She’s shown in the new promo browsing a book of baby names, then in a tense interaction with Brady during which Brady says that he doesn’t want a child with her. Ouch! And ouch for Brady as well, since Kristen hauls off and slaps him in the promo.

Fortunately, ongoing Days of Our Lives spoilers indicate that Brady will soon warm up to the idea of being a father again, and to the fact that Kristen is going to be the mother of that child. Eventually, he’ll move Kristen into the Kiriakis mansion to make sure that she and the baby are well-cared-for. He’ll be clear that his concern and love is all for the baby and not for Kristen herself, but of course Kristen will hope that Brady comes around and decides to offer some love and affection in her direction as well.

Now let’s move from the “life” portion of the promo into a sadder topic…death. Julie will be on death’s door in the coming week, as her latest heart attack has weakened her already-compromised health. She needs a heart transplant, and she needs one now, but unfortunately her age will prevent her from going on the donor list. Her family will rally around her, with Doug Williams (Bill Hayes) absolutely beside himself with despair as he watches his love deteriorate before his eyes.

The promo shows Eli Grant (Lamon Archey), Hope Williams (Kristian Alfonso), and Doug tearfully embracing and clearly thinking that this is the end for their beloved Julie. It also looks like there will be a point at which they think Julie has passed on, as Julie is shown slumped over in a wheelchair. But according to DOOL spoilers, Julie will indeed pull through, although her donor heart will come at the last possible second, and with a great cost to DOOL viewers.

And that leads us to the last feature of the new DOOL promo, which shows a big showdown between Vivian Alamain (Robin Strasser) and Lani Price (Sal Stowers) in the park. A cape-wearing Vivian is shown wielding a gun and pointing it directly at Lani as Lani tells her to drop her weapon. But it certainly doesn’t appear that Vivian will have any intention of following Lani’s orders, and Lani will fire upon Vivian.

But at the last second, the promo shows Stefan leaping in front of Vivian, right into the path of Lani’s oncoming bullet! As DOOL viewers probably know by now, Stefan will be shot, with Lani absolutely horrified by what’s happened. Of course, it doesn’t look like she could have predicted that Stefan would arrive on the scene and throw himself right into the path of her bullet, but still she’ll feel tremendous guilt over the situation, which will result in Stefan’s untimely death.

And while it isn’t shown visually in the promo, one can hear Gabi DiMera’s (Camila Banus) voice crying out, “Oh my God, Stefan,” presumably when she learns about what’s happened to her husband. There should be some terribly sad scenes as Gabi learns Stefan’s fate. Kayla Johnson (Mary Beth Evans) will be forced to tell Gabi that Stefan is technically alive, but that he has no brain activity, which means he’s lost forever.

Ongoing DOOL spoilers indicate that Julie will ultimately receive Stefan’s heart, and that Gabi will agree to Stefan being Julie’s donor after a tearful and heartfelt request by Eli. Julie will ultimately undergo life-saving surgery while Stefan is pronounced dead. It will certainly be an emotionally wrenching week as the action barrels toward this ultimate conclusion.