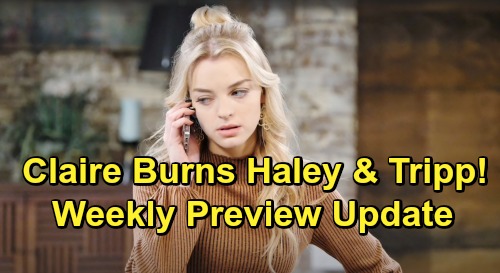 Days of Our Lives (DOOL) spoilers tease that we’re in for a blazing week, as all of Claire Brady’s (Olivia Rose Keegan) angst and conflict comes to a head. The new DOOL promo for the week of June 3rd is all about Claire and the horrible consequences of her rage. She’s been upset ever since Haley Chen (Thia Megia) came into her boyfriend Tripp Dalton’s (Lucas Adams) life, and things started getting out of hand when Tripp decided to marry Haley to keep her in the country.

Claire did everything she could to keep the marriage from happening, but she couldn’t stop it, and she had to deal with watching her boyfriend pretend to be lovey-dovey with Haley and play the role of a happy couple. It was too much, and so Claire sabotaged the marriage with her recording of Tripp admitting to her that the marriage was a sham.

But now there’s going to be a huge misunderstanding that will lead Claire to do the unthinkable…again. DOOL viewers know that Claire is dangerous, as she set the first cabin fire that nearly killed Ciara Brady (Victoria Konefal). She’s got a scary obsession with fire, and according to the DOOL promo, her fire starter tendencies are going to resurface again in a big way.

In the unsettling promo, Claire is shown peering through the window of the Horton cabin and seeing Tripp with Haley. Of course, Haley and JJ Deveraux (Casey Moss) are the real couple, but Claire will get the wrong idea when she spies Tripp and Haley together. The two friends will be smiling and cuddling in a moment of friendship that Claire misinterprets for something more.

And that will be the very last straw for Claire. She’ll be feeling rejected, insulted, and angry, and she’ll take the drastic action of setting the cabin on fire! She’s shown in the promo pouring accelerant around the cabin and holding her lighter in her hands.

Meanwhile, the promo indicates that Ben Weston (Robert Scott Wilson) and Ciara will be putting everything together. Ben has been suspecting Claire of starting the fire that nearly killed Ciara last year, but it looks like he and Ciara will start to realize that Claire poses a significant threat and needs to be found asap.

Hopefully, they’ll track her to the cabin, because the promo shows the cabin being engulfed in flames, with Tripp and Haley trapped inside and frantically trying to make their way through the flames. The promo indicates that they won’t make it out of the cabin, as they’re next shown laying unconscious on the floor, likely from smoke inhalation.

As for what happens next, DOOL viewers will have to tune in next week to see. But it does look like Marlena Evans (Deidre Hall) will get a clue about what Claire has done, as she’s shown confronting Claire at the loft and fearfully asking her what she’s done.

It looks like it will be a race to save Haley and Tripp from their terrifying predicament, and Claire is going to be in a world of trouble! Stay tuned to DOOL and don’t forget to check CDL often for the latest Days of Our Lives spoilers, updates, and news.