Days of Our Lives Spoilers: Will Confronts Sonny About Evan, Pushes For Divorce – Makes Painful Sacrifice, Frees His Love 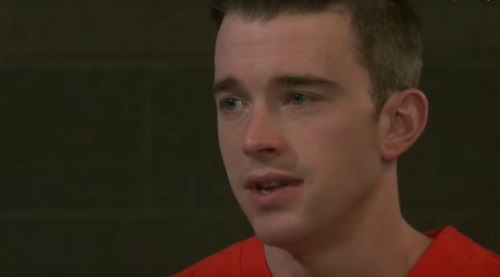 Days of Our Lives (DOOL) spoilers tease that another tense visit is on the way for Will Horton (Chandler Massey) and Sonny Kiriakis (Freddie Smith). DOOL fans know Will ultimately decided to turn Sonny away. Sonny had been visiting Will despite all the pain and anger he was dealing with. He wanted to deliver Arianna Horton’s (Sydney Brower) drawings and updates on what Will was missing behind bars.

However, Will could tell their time together was too rough on Sonny. He suggested Gabi Hernandez (Camila Banus) could deliver any Ari news instead and pushed Sonny to stay away. It was a difficult decision, and it turns out another one is coming up. Will’s once again going to find himself in the position of having to make a sacrifice for Sonny. He’ll just want to do what’s best for his husband – or perhaps soon-to-be ex-husband.

The trouble will likely start with Kate Roberts (Lauren Koslow), who’ll find out about the kiss between Sonny and Evan Frears (Brock Kelly). Days viewers will recall that Evan planted it, but Sonny quickly shut down the idea of this becoming anything more right now. He’s still married and seemingly plans to honor his commitment to Will for the time being.

Even so, a furious Kate will unleash her wrath. She’ll rip into Sonny for betraying Will and most likely fill Will in herself during their next visit. Of course, it’s also possible Sonny himself will bring up the kiss to Will. Either way, Will’s indeed going to learn a lip lock happened, so he’ll inevitably want some answers.

During the week of December 16-20, Sonny will get grilled about Evan and their connection. Will may want to know if Sonny’s in love with Evan. Sonny obviously wouldn’t go that far, but he might admit he has feelings for Evan. He’s lonely without Will, whose role in Adrienne Kiriakis’ (Judi Evans) death has created both physical and emotional distance.

Once Sonny opens up about Evan and how he feels, Will will have to decide what’s next. That brings us to Will’s latest difficult decision. Days of Our Lives spoilers say Will’s going to make a big sacrifice for Sonny’s sake. He’ll want to ensure Sonny’s happiness, so he may get a divorce cooking just in time for the holidays.

Fortunately, Days of Our Lives spoilers point to a blissful reunion for Will and Sonny down the road. This is just one heartbreaking phase of the story. It’ll take time and some major revelations to make it happen, but Sonny and Will should get another shot at happily ever after. We’ll keep you posted as other Days details emerge. Stay tuned to DOOL and don’t forget to check CDL often for the latest Days of Our Lives spoilers, updates and news.