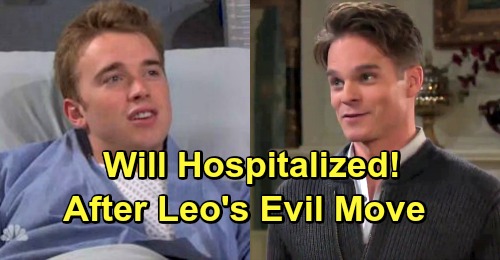 Days of Our Lives (DOOL) spoilers tease that Leo Starke (Greg Rikaart) could take a page out of his mother’s playbook. Diana Cooper (Judith Chapman) certainly has no qualms about hurting people to get what she wants. She’s attempted to kill Dr. Marlena Evans (Deidre Hall) twice now, so Leo comes from a very ruthless background.

Of course, Leo’s already proved that through his own actions. He may have backed off Sonny Kiriakis (Freddie Smith) and Will Horton (Chandler Massey) for now, but what about after he gets burned? Days of Our Lives spoilers say Brady Black (Eric Martsolf) will infuriate Leo by turning the tables. He’ll gain the upper hand on the schemer and leave Leo absolutely livid.

To make matters worse, DOOL fans can expect terrible news for Leo on March 25. He’ll be devastated by what he learns, so he’ll probably find out John Black (Drake Hogestyn) isn’t really his father.

Leo’s been eager to get to know John, especially since Richard Cooper was an abusive menace. Nevertheless, the fact that Leo killed Richard has haunted him for years. That makes the idea of Richard not being his dad even more appealing. Unfortunately, it seems Leo will realize all of this was Diana’s twisted scheme.

Days of Our Lives spoilers say Leo may be on his way out of town soon. He’ll at least be walking away from Will and Sonny on March 26. Leo will leave them with a troubling goodbye shot, but what does that mean exactly? Is this about a comment that serves as an ominous blow or does this mean a literal shot? It’s certainly possible Leo will inject Will with something before he disappears.

Will used Dr. Wilhelm Rolf’s (William Utay) serum, so who knows how his body will react to what Leo gives him? It could even be something that causes Will to lose the memories he’s gained. Whatever the case, Days spoilers state that Will’s health crisis is looming. He’ll have to head to the hospital during the week of March 25-29, so Sonny is sure to be a mess.

It sounds like some exciting story developments are coming up. We’ll give you updates as other Days details emerge. Stay tuned to DOOL and don’t forget to check CDL often for the latest Days of Our Lives spoilers, updates and news.