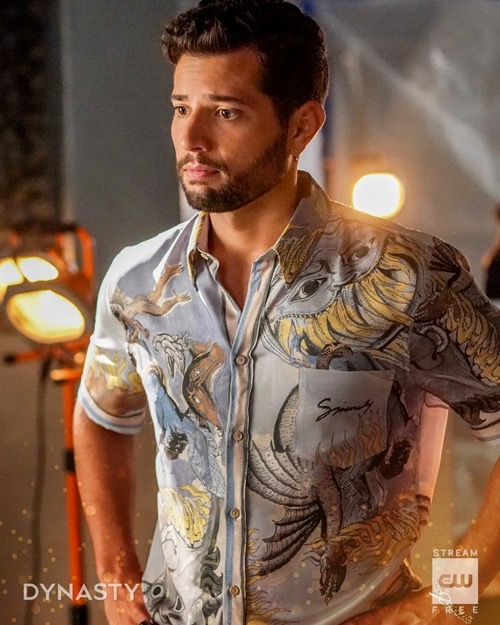 Tonight on the CW Dynasty the reboot of the 1980 series that followed the Carrington family airs with an all-new Friday, October 18, 2019, episode and we have your Dynasty recap below.  On tonight’s Dynasty season 3 episode 2 “Caution Never Won A War,” as per the CW synopsis, “Blake and Fallon face legal troubles while Fallon and Adam cope with the outcome of Liam’s accident in very different ways.

Tonight on Dynasty, Blake is attested and processed, Fallon decides to not run and accept her punishment. During a photoshoot Sam and Anders discover the treasure hidden behind a wall that could delay the opening of the hotel, it turns out the artifacts qualify the hotel to be a historical landmark.

Blake’s lawyer tells him his bail hearing is in two days and his DNA is found inside Max’s bag, Blake and Culhane cross paths in the jail they are cellmates sharing the same room, Dominique schedules an interview with the press and Cristal goes to tell her to cancel or else she’ll stop receiving money from Blake, she agrees and decides to tell a story on her half brother instead.

Fallon tries to get Liam his memory back by showing him pictures, but Ashley has told him that she is a psycho. Adam reschedules a board meeting behind Cristal’s back that gives him acting CEO role over the winery, he also goes to the hospital to question Liam about the night of the accident but Liam tells him he can’t remember which he is pleased to hear.

Fallon continues to try to get Liam to remember her by bringing a meal he cooked for her Chilean Bass and spraying his favorite perfume scent Rosewater, he still can’t remember and his mother Laura continues to paint her as a crazy and deranged stalker and has her escorted out the hospital by security but just before as she is dragged out she and Liam make an intense eye contact as if he finally begins to remember her.

Cristal encounters Kirby visiting Culhane at the jail, and she also tells him what Adam has done about the winery meeting. Kirby tells Culhane she’s been kicked out of the manor and he offers his place for her to stay.

Sam tells Fallon to give up her efforts on getting Liam to remember her since she’s going to be sentenced in a few days, but he sees she refuses to give up so he then tells her to do something epic to bring his memory back.

Culhane tells the other jail men about Blake and who he really is and turns them against Blake causing friction, Blake addresses Culhane on this and they end up fighting on the jail yard with the guards restraining Blake and one takes a picture of Blake.

Back at the cell Blake threatens Culhane to keep his mouth shut and if not he says he’ll end up like mack who Joey overhears, at his bail hearing the judge denies his bail turns out the other cellmate Joey was an undercover federal agent who made a deal with Culhane to get Blake to admit his wrongs which he did and Culhane is set free.

Fallon kidnaps Liam our the hospital and takes them to where they first met in and he starts to remember but then Laura pops up, she had a tracker placed on Liam, she interrupts tries to takes Liam back, they begin to argue Liam asks them to stop and tells Fallon to stop her efforts as well.

As the hotel prepares to launch an event over the landmark finding and honor the man who built it, he’s visited by the man’s granddaughter who tells Sam he was homophobic and an advocate for gay conversion therapy which Sam isn’t pleased to hear.

Fallon is sentenced to 100 hours of community service the judge says she plans to use her as an example instead of sending her to jail for 5 years. Laura serves Fallon with a restraining order facing her to keep her distance from Liam.

Cristal and Blake get married and have a ceremony in jail she vows to do whatever she has to do for his release.