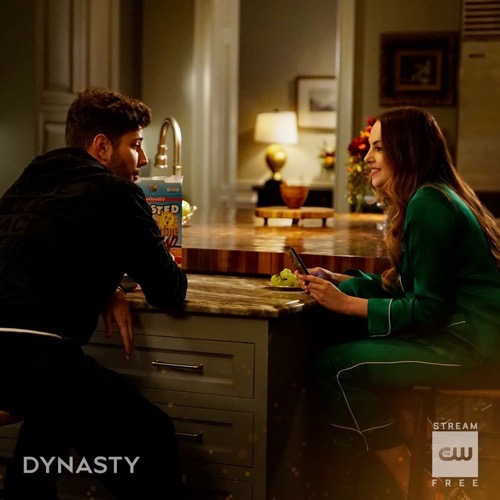 Tonight on the CW Dynasty the reboot of the 1980 series that followed the Carrington family airs with an all-new Friday, November 22, 2019, episode and we have your Dynasty recap below.  On tonight’s Dynasty season 3 episode 7 “Shoot From The Hip,” as per the CW synopsis, “Blake readies the family to celebrate what could be his last Thanksgiving, beginning with a request that Adam and Cristal put an end to their constant bickering. Fallon continues to focus on her new project and Liam has a chance encounter with an old friend.

Culhane pushes Dominique to disclose important information, while Dominique continues pushing Monica to work with her new singer Vanessa. Sammy and Anders get outside assistance with the hotel.”

Tonight on Dynasty Adam asks Cristal for her help in making Thanksgiving dinner memorable for Blake this year. This is all apart of Adam’s plan so , they begin making a pecan pie and sabotages the dinner by having his maid raise the temperature on the stove in an attempt to burn the pies they placed in the overnight and she takes a SIM card from Cristal’s phone.

Cristal discovers the pie is ruined and Adam pretends to be devastated, Cristal offers to go get more pecans for the pie so they can make another one, while Cristal is out for the pecans her car begins to give her trouble and she pulls over to make an emergency phone call only to discover her phone has no Sim card to make any calls, which is all orchestrated thanks to Adam.

Michael demands Dominique tell her children the truth or he will.

Fallon and Liam meet with British director Landon for her upcoming piece in a magazine. The two men begin to reminisce on the past since Landon and Liam’s mother knows each other intimately, Fallon tried to pitch her idea for her piece in the magazine but Landon is more interested in Liam’s piece and bonding with him leaving Fallon on the outside looking in. Fallon is visibly upset about this and feels Landon is giving her the run around because she’s a woman.

Sam hires Fletcher to help him with damage control on how to fix his hotel from what happened to Victor, Sams hotel is receiving bad press from visitors online.

Fallon decides to step up to Landon during a turkey hunt but that backfires, as Landon offers Liam to move to London and this upsets Fallon she reveals that she made up the assignment so that she could accompany Liam because she feared he’d forget her. Fallon accidentally shoots Landon on the turkey hunt. Liam is upset that Fallon lied about the job just to keep him close. Fallon apologizes to Liam for lying and they agree to start over

Sam is still trying to figure out damage control for his hotel. Sam holds a Thanksgiving drive for homeless people at the hotel and it works because the hotel begins to receive some positive press. Sam apologizes to Fletcher for being so hard on him when he asked for his help and they share a kiss, Anders tells Sam he’s quitting working at the hotel and that Sam is doing a good job.

Dominique asks Blake for dirt on his former driver Michael and he gives her a folder, she goes to Michael and threatens to release the information in the file to his family if he doesn’t back off and leave her alone. Vanessa was expecting Dominique to tell Monica the truth but she explains she didn’t tell her they are sisters and she wants to just sign the contract, Vanessa tho tells Monica the truth over dinner and upsets and shocks Monica and she storms off from the table.

As it’s time for Bkakes family picture he’s expecting Cristal and Adam to be there but only Dominique and Adam are there for the photos due to Cristal being stranded out on the road, which Adam is happy about as he suggests him and his father take the family photos with just the two of them.

Black and Adam and Ms. Watts begin to have dinner and in walks Cristal, she tells Blake that her car caught two flat tires and she had no cell service Blake is upset but Cristal talks him down saying Adam was just trying to make dinner memorable for him and the rest of the family comes to join the dinner. Andres returns to ask Blake for his old position back and Blake gives it to him happy to have him back.

Cristal confronts Adam stating she knew it was Adam and Nadia who tried to sabotage thanksgiving dinner, Nadia goes out to meet Fallon in the car and is handed a stack of cash by Fallon and says she has Adam wrapped around her finger and Fallon replies “great “.